I know I haven't blogged for awhile but I really really was so tired from Christmas and everything else going on.  I had to take a little break!  I was simply exhausted:  minis, redoing the floors, Christmas shopping and cookie making.  Not to mention all of the regular work around the house and cooking.  I think I slept for two days on and off from sheer exhaustion.  So I took some time off, working very sporadically.  I have gotten a little done, and I'm now getting back to work a lot more than I was.  Here's what I have done to the rabbit hole first of all, and keep in mind that I have so much more to do before I'll be happy with the inside enough to start adding in furniture and other things: 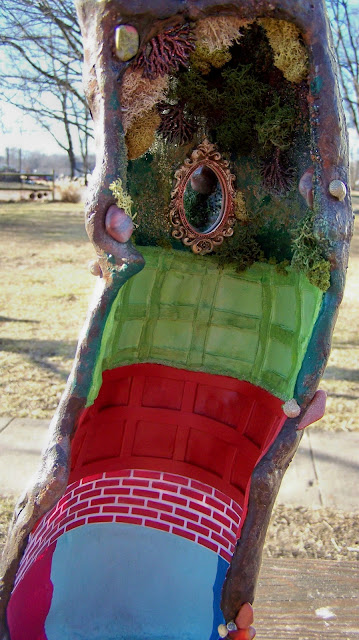 Much of this will be less visible anyway after I get stuff inside the hole.  And the bottom floor (the 3 different colored walls) are just started, they need the trim work like up above.  And each section I'm trying to give it's own individual look so they don't blend into each other so much as the original sculpture.  I want each section of wall to have a life of it's own like in the original Disney movie.  Like I said, still so much to do and add in.

It will evolve as I continue my work.  The outside has nothing new added but I have begun adding a large rim around the top so I can add a scene up there that will be full of life and cool things.  Right now it's nothing but raw clay with nothing added so it's not worth a look yet.
So anyways, that's where I'm at right now on that project.
I'm waiting on a little help from my husband who has been too busy thus far to help with my meat pie oven project.  I bought a thin metal pipe thingy that needs to be hooked together and cut off (which is where he comes in).  I don't have the strength to use tin snips on it so I have to wait on him :o  But the fire unit came in the mail so I have a good start on supplies :)
Also, I have some interest in the upcoming Snow White and the Huntsman movie so I thought I'd make a creepy little gothic chest in honor of the new film.  This chest was made to me quite nefarious in nature, slightly gothic, and most definitely evil :) Evil in purpose anyway :) Why evil? Well what else could it be when it's made to hold poor Snow White's heart? The evil queen did in fact send the huntsman after her and asked for her heart to be brought back in a chest. And so I've made it: a tiny human heart in a jar of fluid, a long dagger/sword with a smidge of blood on the blade, a casting crystal orb on a stand, a poisoned apple, a bottle of poison apple potion as well. The outside has images of the evil queen (Charlize Theron) and snow white (Kristen Stewart) from the upcoming movie Snow White and the Huntsman. The inside has a classic Disney Snow White image of the evil queen and her magic mirror in the lid.
Here's my icky winter time pictures of it: 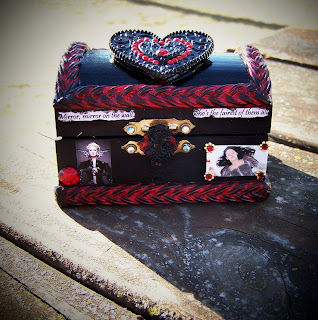 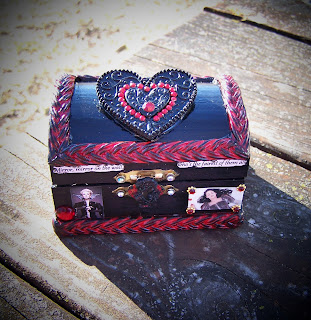 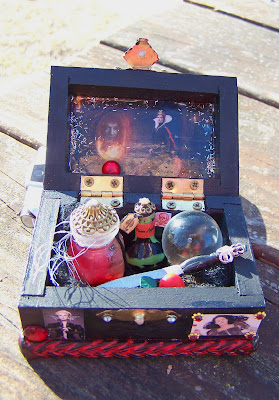 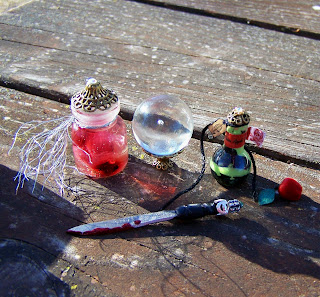 You can't see it but there's a heart inside the glass bottle :o  Pretty convincing!

Finally I've had this jewelry chest sitting around for quite some time waiting on time to make it.  I didn't want to do a regular jewelry chest out of it, I wanted to make something neater.  So I decided to paint it black, stain the pink lining a dingy red, and make a wizard or witch ingredient chest out of it.  Like an advanced potion ingredient chest, with lots of labels with the names of Harry Potter potion ingredients on them.  There were some great potion and ingredient names from those books and movies.  I managed to find a long list of them.  Here's the cabinet, although it'll be far more tricked out in the end than what you see here: 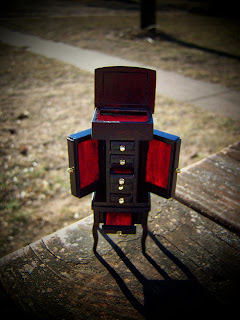 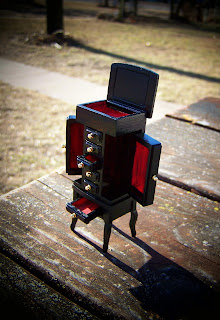 This doesn't look like much right now, but give me time and you'll see a really cool miniature in the end :)  I plan on adding metal filigree details to the outside as well, and this will be one of a kind because I only have one of these chests.
Posted by tarayvonne at 2:36 PM