Just about to get started on my Miniature Mrs. Lovett's Pie Counter and a couple new things

First of all, welcome to my dear new followers!  Thanks for joining in to see what Sherry and I have coming up in the future!  We appreciate every comment and just adore talking to you all!  If you haven't joined Sherry's blog (19th Day Co-Creator Sherry who happens to be my beloved Mother-in-Law) you should go join her blog because she has some amazing skills!  I happen to think she makes some of the best birds in the business!  She's also very good at dressing some of my creations such as the white rabbit from alice in wonderland, the headless horseman, and alice in wonderland herself :)  Her blog is located here:  http://19thdayminiaturessherrys.blogspot.com/

What have I been doing the past couple of days?  First I made a ghost sculpture from polymer that I think would be neat in a haunted house scene or a Halloween graveyard: 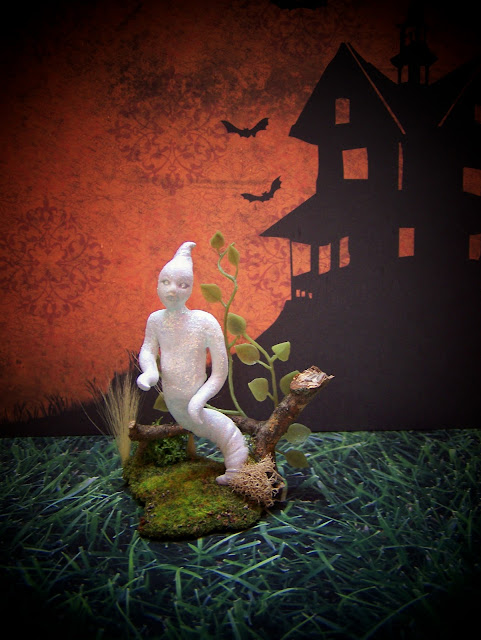 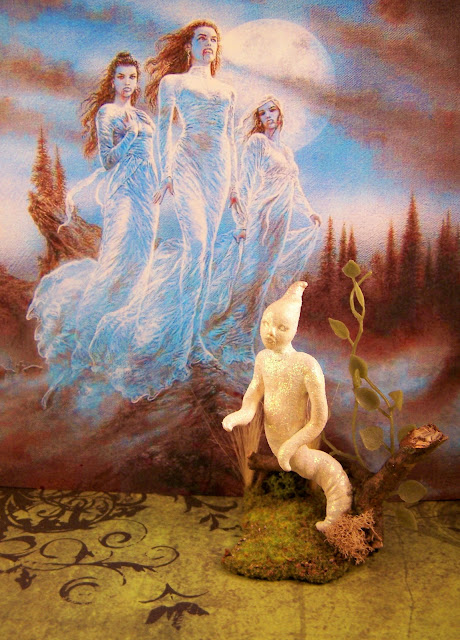 which is available in my store now for the very reasonable price of $30.00.  I did it just for fun and it wasn't a big intense project :)  Apparently I like Halloween so much I can't stop making little bits of this or that in celebration of the season.
Then I had a custom order for another Honeydukes Chocolate Frog display so I got that done: 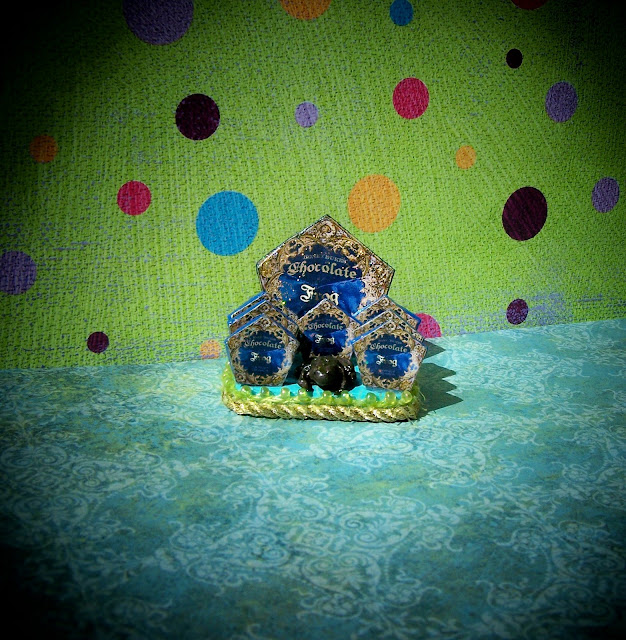 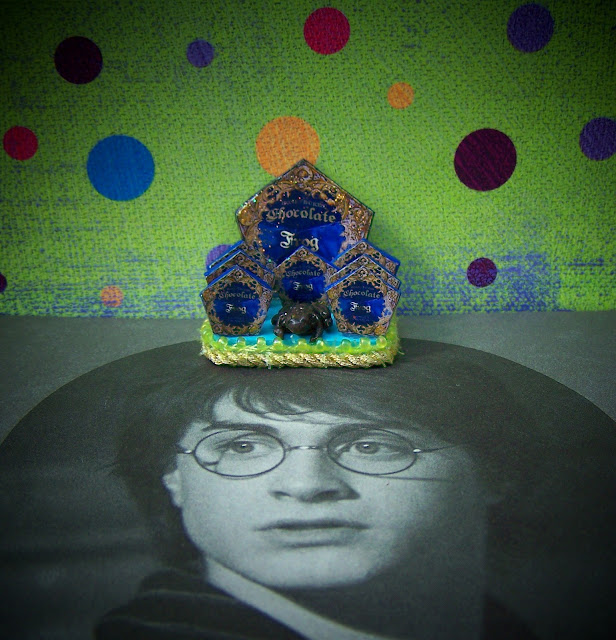 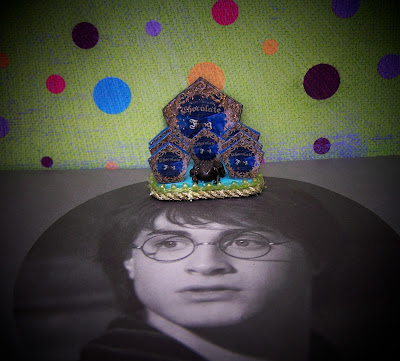 Sorry about the multiple shots but you all know I like messing around with photography and props :)
I think this turned out very good.  I did make the backboard sign a little bigger this time because I felt the last one was too short and didn't really say "display" as well as it should have.  It was still cute but I felt the back sign needed to be slightly taller.  That's the only change and it's not a major one.
Last night I decided to make a hanging sign out of this wooden ornament I had.  So I did :)  It's OOAK because I don't have another wooden ornament to use to make another, so when it's gone it's gone for good.  It had a hideous painted Christmas tree on it that I sanded off and then I refinished the piece into what you now see before you. The rustic wooden feel of the piece lent itself well to this particular Harry Potter place of business :) I felt it could really do the pub proud. It is meant to be glued directly onto the side of your miniature building-which is quite easy with an inexpensive glue gun that can be purchased at any hobby store or discount store. Not comfortable using one? A nice big glob of super glue will also do the trick, but you'll have to hold it in place as it dries! Matter of fact if you do use a glue gun I would advise going around the base with some super glue anyway to really hold it on after the hot glue dries. Oh you know, you'll figure it out :) It measures roughly 3 1/2 inces wide and 3 1/4 inches tall.  I tried to capture some of the look of the real sign at Universal Studios in Florida.  It's not exact by any means, but I think it works very well. 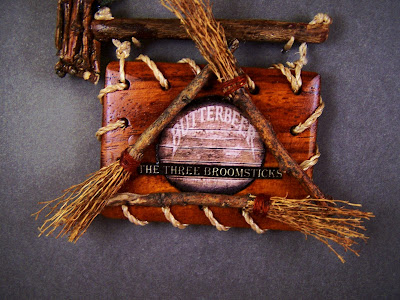 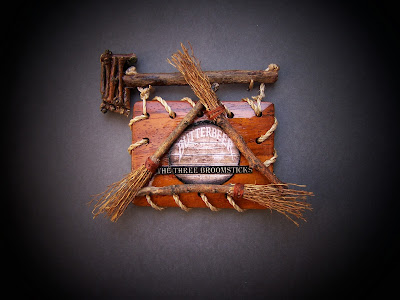 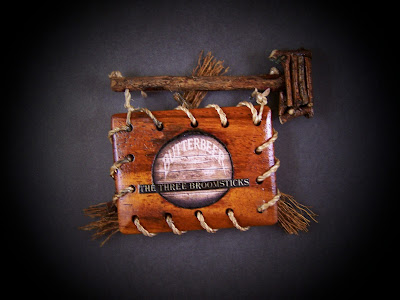 I'm going to be making a Honeydukes Sign as well, which hopefully will look like the real one as close as I can get it with what I have on hand.
Also, tonight I begin my Mrs. Lovett's pie counter.  I had to wait on my husband to help me because he bought me a new scroll saw that's quite large and scary.  Two nights of fishing and running aside, I think I might have him pinned down tonight into helping me learn how to use it safely :)  This way I don't lose a finger or two trying to figure it out!  Although fingers really do fit into the grand scheme of the miniature I'll be making :)  But I was hoping to use some fingers in it that weren't actually mine :)  Hehe!  Ok enough goofing around.  Here's my bowls I picked up for it so far:
I bought two that look very similar to this real bowl and look just as antique and primitive and they were the only ones I could find on all of ebay and etsy like this bowl: 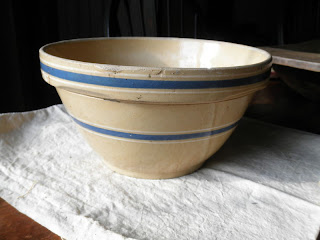 but they only have one solid blue band around the rim.  And then I bought these that looked aged as well and slightly icky-looking:

because again, they looked old and used.  Remember everything must be a little gross :)  I also picked up a different bowl that will hold eggs and a wire whisk for beating them.  I'm making a rolling pin because I couldn't find one similar enough to hers in the movie.  I have so much to do but at least you get the idea :)  Of course these will be the worst pies in London :)
Also I should mention this might already be sold, not quite sure.  It depends on if she likes how it turns out :)
Alrighty then everyone, have a lovely day and keep on collecting!