Updated at bottom-Sheesh, when it rains it pours I guess!

I haven't had time for much so far this summer, things have been crazy!  Summer vacation is usually wild around here every year, but this year so far has taken the cake :(  The kids are home from school of course, and I have been overran by kids here since school break started.  I have five here right now and one more coming over in an hour.  This coupled with family things and friends stopping in as well as the worst weather we've seen in awhile that seems to hang on and around all the time.  We just had a lightning storm a few days ago that has wrecked havoc with nearly everything.  We awoke to a lightning strike that sent us flying up out of bed in terror.  Just outside our bedroom window it struck one of our trees and apparently messed up the power around here somehow.  We could feel a charge in the air and we lost power to our garage and outbuildings as well as losing a TV, a few lights, our washing machine isn't working now and our tree has to be cut down.  It blew the bark right off the tree and we found bark clear on the other side of our two story house!  It flew that far away.  Here's a pic of our cracked open tree-still standing but broken clear through the center: 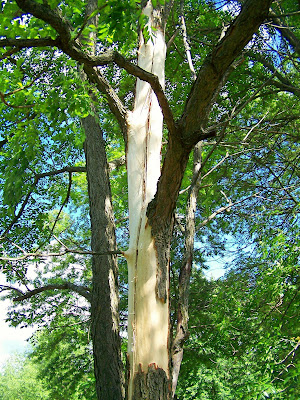 Yikes, we were only yards away inside our upstairs bedroom.  Glad it can't get to people inside!  Although my head felt funny for awhile after it struck as though maybe the electricity in the air affected it.  All I can hope it that it knocked some sense into me, lol!  Anywho. so that's been my summer.  Mini making has been lax due to lack of time and so much company.  Sherry was back for a lovely visit though and we worked diligently the week she was here on our new store trying to get some new stuff made for it.  We're still learning some new things so these are the beginning stages of what's to come from us as we learn jewelry-making, hair accessories and bath products.  I have high hopes for it eventually being a really great store before we're all done.  We are still learning but I think we're doing pretty good in our initial stages of it.  A sampling of some things we've been working on for it: 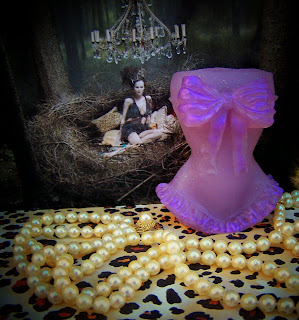 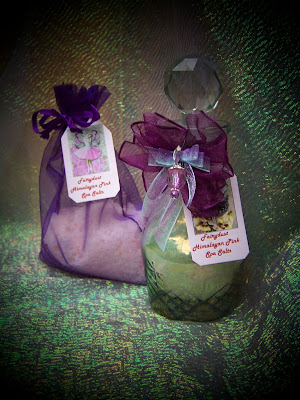 Even things for men: 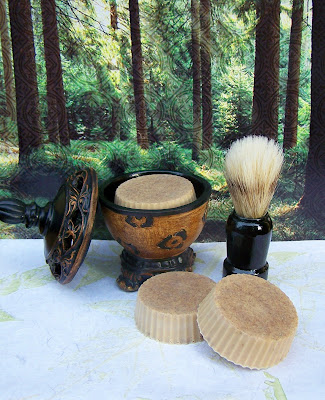 And our current favorite, an Alice in Wonderland "Drink Me" bottle soap! 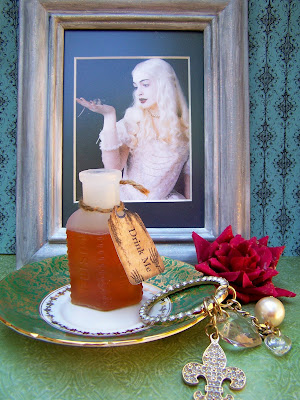 Which one of the custom minis I just made for a client was the same theme, hehe: 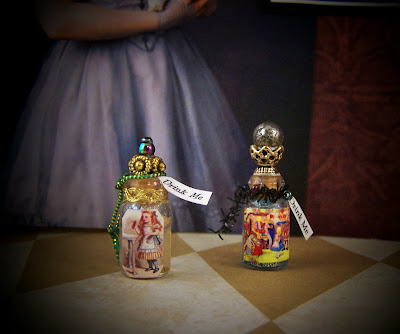 And this was a custom order for another client I just finished today: 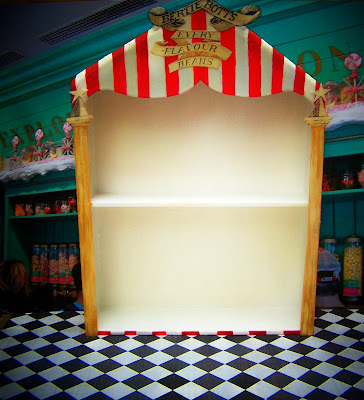 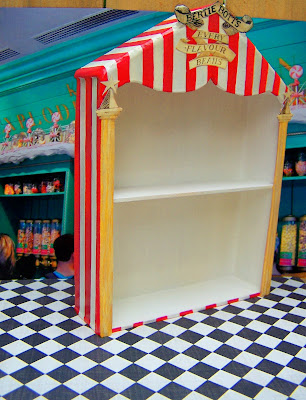 She needed a bertie botts cabinet with nothing in it because she had her own bottles for it :)  Cute!  I can't wait to see her Honeydukes :)

By the way, I have tried and tried to leave comments on the blogs of my followers and it won't let me no matter what I do!  I keeps making me resign in and I never get anywhere :(  I'm not trying to neglect you guys, it just won't let me go tell you all how awesome you are on your blogs :(  Also, now that I've announced the giveaway, we'll apparently never get to 100 followers!  Sheesh.

My comments to your comments will now have to be added on to the bottom of my posts because I cannot even leave myself a message in the comments part!  So here are my replies:

I had my client's picture of it so I was able to use that instead.  I highly doubt if I could have done it without so I admire your ability!  My painting skills aren't THAT good.  It was all I could do to get the stripes painted on straight!

Posted by tarayvonne at 4:47 PM