Have your fortune told by the famed voodoo queen, miniature style

I think at one point in so many miniature artist's lives, they are drawn to the taboo.  There is a moment where some slightly risque thing calls to them, "Create me."  Something not quite ok with society, something on the fringe of right and wrong.  And this is a safe medium, where you can make it and no one raises an eyebrow because it's from a world of make-believe :)  There is a sort of permission already granted, because it's not for real life.  And this is why miniature scenes are created around haunted houses, vampires, the occult, and the list goes on and on.

And also voodoo.  And fortune-telling.  The voodoo queen of New Orleans, Marie Laveau, has always fascinated me. 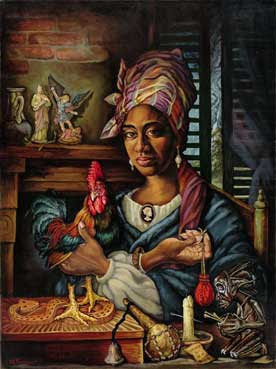 A simple history:
"The most famous voodoo queen in North America who were actually two persons—mother and daughter. They epitomized the sensational appeal of Vodounism New Orleans during the 19th and 20th centuries. They taught and used the religion’s magical powers to control one’s lovers, acquaintances, enemies.
Marie Laveau I, the mother, supposedly was born in New Orleans in 1794 and was considered a free woman of color. Being a mulatto, she was of mixed black, white and Indian blood. Sometimes she was described as a descendant of French aristocracy or a daughter of a wealthy white planter. Her marriage to Jacques Paris, a free man of color from Saint Dominque (Haiti), is recorded as occurring on August 4, 1819; the records also indicates the Marie Laveau was an illegitimate daughter of Charles Laveau and Marguerite Darcantrel. Paris, being a quadroon—three fourths white, disappeared soon after the marriage. Perhaps he returned to Saint Dominique, but his death certificate was filed five years later without any certificate of interment. Then Marie began addressing herself as the Widow Paris and took up employment as a hairdresser catering to the wealthy white and Creole women of New Orleans. This was the beginning of her later powers as Voodooienne. For the women confessed to Marie their most intimate secrets and fears about their husbands, their lovers, their estates, their husbands’ mistresses, their business affairs, and their fears of insanity.  Quickly tales circulated of hidden and secret rituals being held deep in the bayous, complete with the worship of a snake called Zombi, and orgiastic dancing, drinking, and lovemaking. By the 1830s there were many voodoo queens in New Orleans, fighting over control of the Sunday Congo dances and the secret ceremonies out at Lake Pontchartrain. But when "Mamzelle" Marie Laveau decided to become queen, contemporaries reported the other queens faded before her, some by crumbling to her powerful gris-gris, and some being driven away by brute force. Marie was always a devote Catholic and added influences of Catholicism--holy water, incense, statues of the saints, and Christian prayers--to the already sensational ceremonies of voodooism.  Eventually, Marie Laveau, with all of the secret knowledge which she had gained from the Creole boudoirs combined with her own considerable knowledge of spells along with her flair, became the most powerful woman in New Orleans. Whites of every class sought her help in their various affairs and amours while blacks saw her as their leader. Judges paid her as much as $1000 to win an election, other whites paid $10 for an insignificant love powder. She freely helped most blacks. To visit her for a reading became fashionable."

Of course, I had to do a voodoo queen table :)  I've got it started anyway.  I'll post updates as I get further along.  Right now, this is pretty basic and far from finished.  So much more going on here and the chair isn't redone yet.  A partial list of possible items going on this table:

Here's what I have so far but I took these right before dark and they are difficult to make sense of: 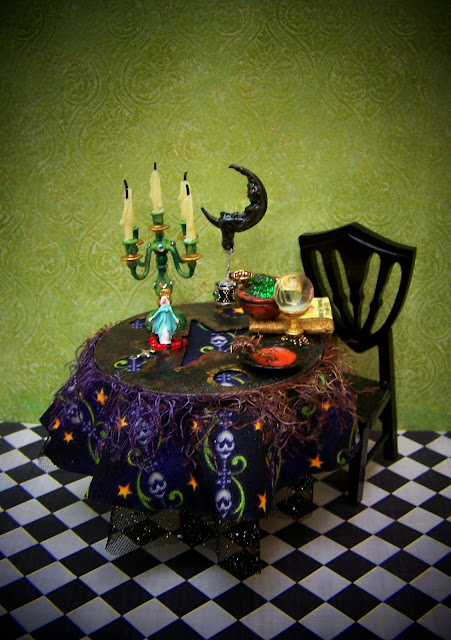 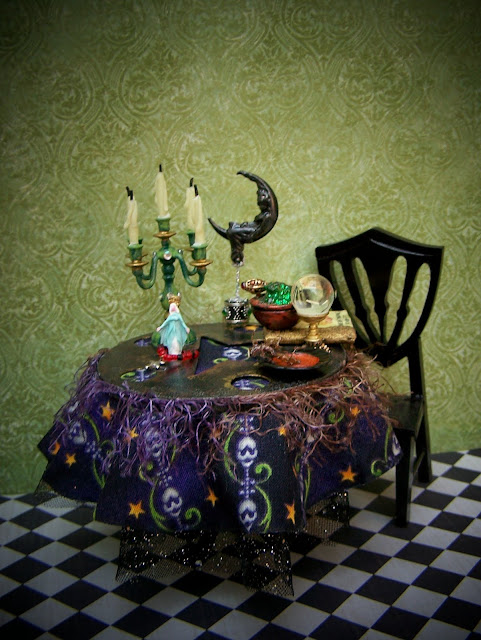 That table topper is metal, by the way.  I've put it over the top of two voodoo-patterned table covers.  In the center is a rather large star which I'm going to try to not cover too much because in person it's very cool.  I can't tell you all the detail you're missing in these pictures, so sad!  Hopefully tomorrow I can turn out way better photos :(  Like for instance, on that plate is a very nice root, and on that plate will be the broken egg and feathers and runes.  As though Marie has been casting a fortune for some customer with her hoodoo ingredients, hehe.  And you can't see it well but there is a tiny statue of the virgin Mary with a rosary around her feet.  The metal cross is so tiny you wouldn't believe it!  Check back in tomorrow for new pictures and maybe a few new things on it :)

Posted by tarayvonne at 6:04 PM