A friend of mine got me interested in Steampunk style, and the neo-victorian gadgetry look has me enthralled.  I'm a little late coming to this style, it seems everyone has done some sort of steampunk item.  That's ok, better late than never :)  I'm not finished, and I think this item quite possibly is sold already.  Also ok because I highly doubt this will be the last item I do in this theme.  It's just funky and flat out cool!  Yay steampunk!  Now figuring out how to build from the ground up something steampunk is quite wild.  It's not all that easy quite frankly.  It takes some imagination to figure out how to make something look viable and real, as if it might actually do something if you were to turn it on.  Especially in miniature, not too easy!  I've fiddled around with my project for about 3 days now.  It's coming together well, but it's not done.  I want to add more pieces to it because it's not full enough.  I'll explain as I post the pictures.  That would be the best way to convey what I want from it in the end. 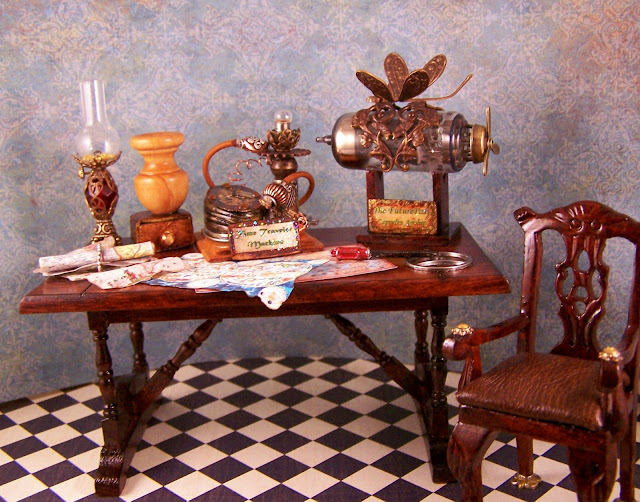 Ok my pictures never do anything I make justice first of all.  And like I said, so far from done right now.  I started with a light-colored table and darkened the finish.  A lot of victorian furniture was dark.  I redid an arm chair to match, adding gold details to it for it to fit the steampunk style better.  One thing steampunk isn't is plain.  The materials common in the style are wood, metal, leather, glass, etc.  Old fashioned machinery housed in wood casing.  So I recovered the damask seat in some nice leather.  It looks more masculine and fits the style. 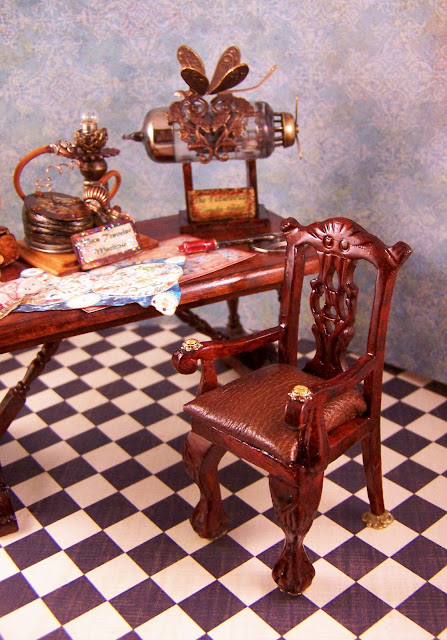 I saw a necklace made to look like an old airship/dirigible/zeppelin and fell in love with it from this wonderful etsy shop:
http://www.etsy.com/shop/TrashAndTrinkets?ga_search_query=airship+necklace&ga_view_type=list&ga_ship_to=US&ga_search_type=handmade&ga_facet=handmade
.  Problem is, too bulky and awkward to wear.  But I thought it would make a great miniature so build it I did :)  I named The Futurepast Zeppelin Airship and put it on a plaque that I aged quite effectively with paints and stains.  I got the name from my favorite chapstick seller:  http://www.etsy.com/listing/59933003/on-sale-futurepast-spiced-raspberries
who also makes a killer mad hatter chapstick that tastes and smells out of this world in her other etsy store:  http://www.etsy.com/listing/59397073/a-hatter-madly-sugar-mango-flavor-orange
Ok enough about chapstick.  I know, I am an addict.  I hang my head in shame :)  Haha, jokes aside, back to my project: 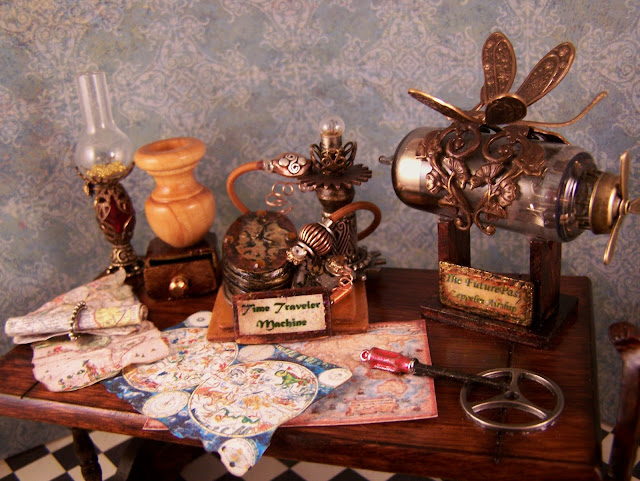 the airship is not finished, I plan on hanging some netting over the back end that will hopefully drape over the side of the table and look cool :)  Maybe some ropes and also some billowed leather fins might look cool on the back end sides.  Who knows what I'll add.  But it's not elaborate enough for me yet.  And like I said, so much more going on this.  I just ordered some curly feathers to make nice feather quill pens to put in the empty wooden vase.  Plus I need to make a boss inkwell all tricked out as well.  A variety of beautiful old maps are piled around the table.  So hard to see them right there.  Oh I guess I could add the pictures on of them. 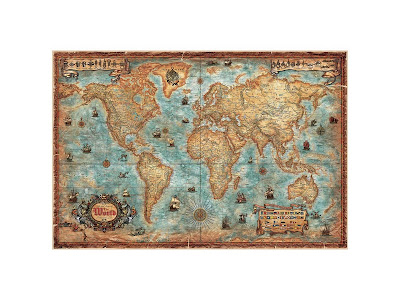 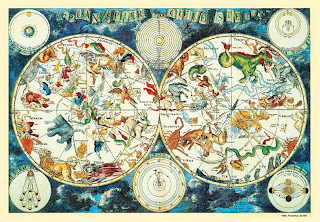 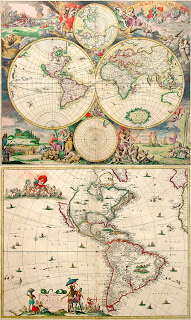 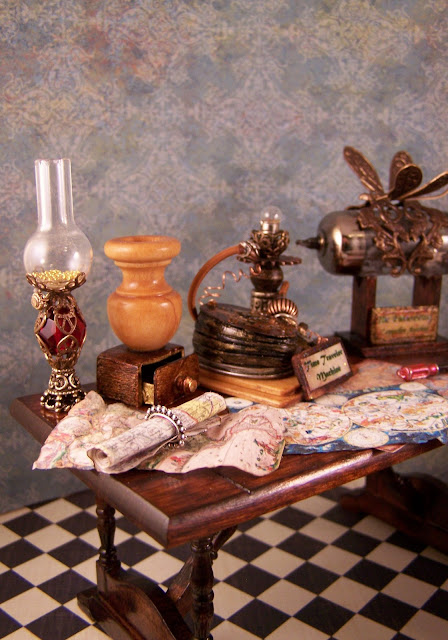 There is a shot of the oil lamp I built from scratch that needs a good cleaning before I sent this table off :)  Yikes, smudgy!  I think I may add some red bling crystals to the base too.  I also built the little drawer unit beside the oil lamp and distressed the crap out of it to make it look old. 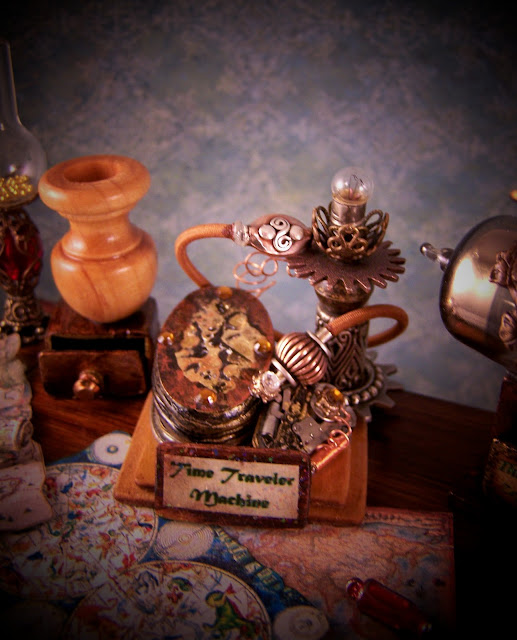 Here we have the slightly unfinished table top time traveler machine I built.  Wow fuzzy picture but you get the idea.  So much better and more detailed in person.  Here at the house, it looks fabulous.  I took an old watch and tore it to pieces.  I used the face and distressed it with several different paints then sealed it with clear coat.  Then I took polymer clay and made a set of billows the same size and shape as the watch face.  I added them on underneath the watch face.  Then I added the back piece of the watch to the bottom so there would be something metal under there.  Bling crystals in a nice amber tone were added to the watch face.  I wanted to keep it to metallic color scheme so nothing would stand out as fake-looking or too bright.  I made a double layered wooden base and stained it honey-colored to keep it from blending into the dark table top.  the front plaque isn't finished yet.  I plan to make it more elaborate.  The guts of the watch a repainted from solid stainless steel to various metal colors to age the look of it.  I added copper wires twirled into spirals for a more techy look.  A few more bling crystals and beads as well, you can never have enough bling :)  I added cloth-covered tubing because they didn't have clear plastic back then as far as I know :)  It looked older.  And a tiny dollhouse light bulb on top adds mechanical interest to the top post.  In person, it looks as though this thing could really do something.  Here in this picture?  Not so much :)  Well anyway, thanks for having a look and hopefully it was somewhat entertaining!  I'll post updates as I finish it up.
Posted by tarayvonne at 11:47 PM