Ok, so here's where I stand.  I'm finishing up my last rose (YAY!) before I begin my next custom order Coraline items.  I'm making the box with button eyes in it, the beetle chair, and the fireplace from the other Mother's house.

After those are done, I am taking a short custom order hiatus in order to work on some of my own projects that I'm really wanting to do.  During that time, if anyone needs something you can contact 19th Day Minis Co-Creator Sherry on her blog:  http://19thdayminiaturessherrys.blogspot.com/
if you would like something custom made.  She will contact you back if you leave a message there on her most recent post.  Sherry has become a truly gifted miniature artist herself and is very capable of making you guys something fabulous!  Nearly Everything she's made has sold well in my store, including her fantastic Alice in Wonderland Christmas tree :)  She's currently working on a cute idea one of my customers had for a Valentine's-themed cabinet with wine, roses, poetry books, candies, etc. and I can't wait to see how it turns out!  I'm sure she'll be posting pictures on her blog when she's done.

My first project of my own is my Red Queen dessert/tea cart.  I have plans for a really detailed, tiered cake in red, black and white color scheme.  I'm going to be making food items mentioned in the movie like tadpoles on toast, Squimberry Tarts (I think this is what she called the juice she wipes from the mouth of the frog who has stolen her tarts) and things the red queen might enjoy.  This cart will be decked out to high heaven!  It's a special project for me so it will be done very carefully.

Another project I'll be doing was actually thought of partially by Sherry.  She wanted to do an old western horse cart with a coffin in it.  This got me thinking about what more could be made of this idea.  I've taken her good idea and ran with it.  I asked her if she would be willing to add into the coffin a little skeleton dude wearing a leather cowboy hat and vest with a marshall star badge on it :)  My son got a video game for Christmas that was based on zombies attacking the old west and everything that gets bit by one turns zombie.  So there are zombie animals as well.  Including zombie horses that the main character (not a zombie) can break and then ride.  Now I'm dying to sculpt a zombie horse like the ones in the game :)  I'm thinking zombie horse pulling the old wooden rustic cart full of stoneware moonshine jugs, brown bottles, straw, and coffin complete with a skeletal marshall.  I have no idea why, but I have to do this!  Well it'll help me out with adding some dark-themed items to my store because after all, I am an Etsy Dark Team member (Halloween-ish artists group) and my store has next to nothing in it right now that fits the bill.  Plus it just sounds hilarious and fun to do!

Anywho, here's my last two talking Alice in Wonderland roses I made for one of my clients and I'm not yet done with the last one but pretty close now.  I WILL NOT be making more of these for quite some time, lol!  I need break for awhile on them or I may lose my mind and go mad as the hatter!

The first is based on the original Disney cartoon version of the lovely white singing rose.  I got it close enough I think.  Although since she's in a pot her leaf skirt had to be shortened quite alot.  I'll post the picture of the cartoon rose first and then my version of her afterward: 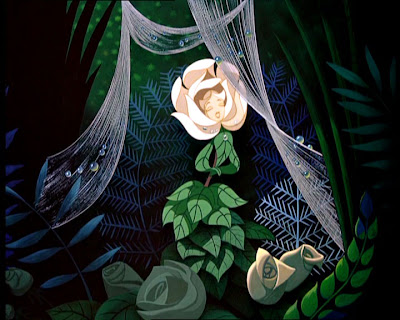 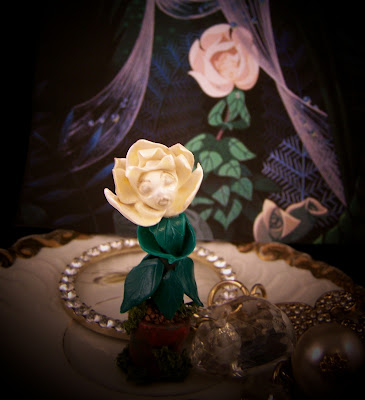 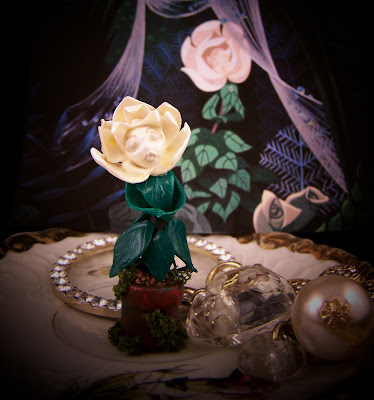 Next I made a Christmas rose named Natalie Noel because I was working on her before Christmas: 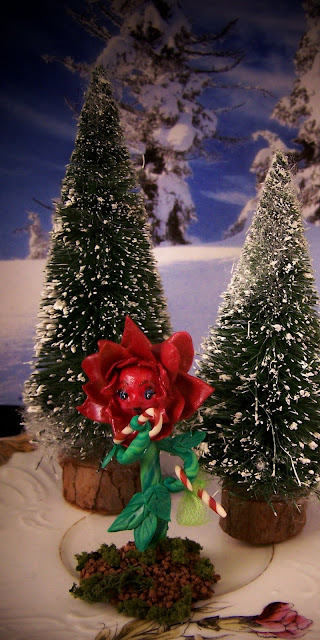 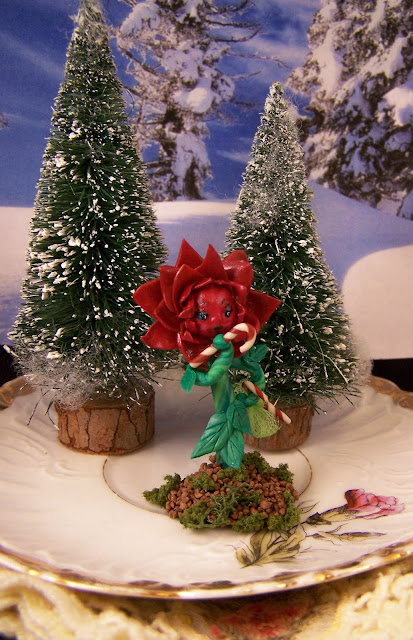 Of course my pictures are crappy as usual, these look so much better in person...I can't even begin to say how much better!
Also my Mom decorated one of the inexpensive Christmas trees I had asked Sherry to make in case people needed a cheaper version for their dollhouses.  I had one that didn't sell that I gave to my Mom to rework into a fairy tree good for really any time of year.  Here that is and it's currently for sale in my Etsy store:

but she forgot to clip off the jump ring on the top of the fairy charm so I'll have to do that and retake the pictures.  I took these outside so the wind was blowing the feathers all over the place that are glued here and there on the tree.  It's really pretty in person though.  I have one more tree that she'll be making into a more wild and natural fairy tree version later on.  This is a more glamorous and pretty one in the fairy theme. 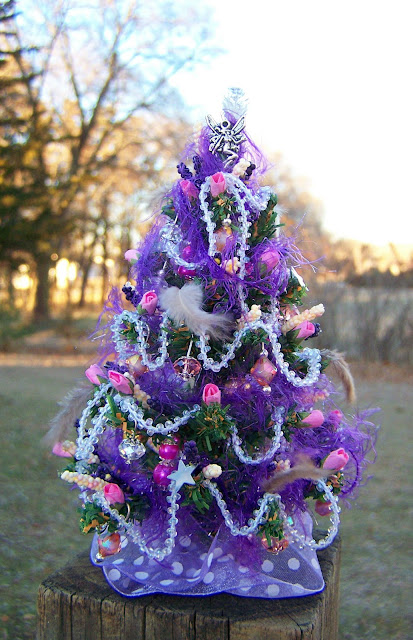 Posted by tarayvonne at 8:04 PM