The Alice in Wonderland Project

THIS PROJECT HAS BEEN SOLD AND WILL NO LONGER BE AVAILABLE FOR SALE IN THE FUTURE.  It wasn't quite done yet but a lady made me an offer I couldn't refuse :) 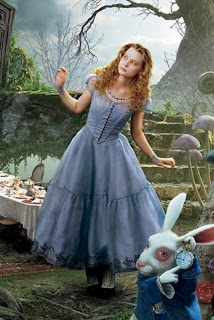 I am currently working on a rather large miniature scene, 13 inches in diameter based on the Alice in Wonderland movie. This particular scene is pretty amazing. I'm calling it "Contemplating a return to Wonderland".


I've taken a piece of dead wood cherry tree and made a weeping miniature tree out of it, added leaves and birds, etc. so that it looks as close as possible to an actual massive old tree. My strength is nature scenes, with moss and wood and growing things like mushrooms. I live in a natural place with woods and growing things all around so my inspiration is right here around me. This scene is full of natural character like this. Starting with the tree, and to the right of it is a mossy knoll with a large-ish rabbit hole. The hole has a spiral vortex paint job at the bottom to show the magic happening down there with a hint of sparkle added to it as well. I've just finished sculpting out an unfinished white rabbit who will need fur and glass eyes which I have here and a jacket and waistcoat. He will be peeking out of the hole looking at Alice. 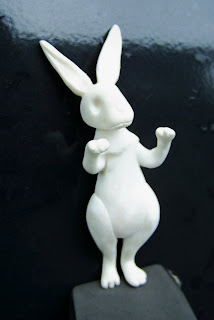 I look forward to clothing him in his little dark blue jacket and waistcoat. I suppose I'll have to sculpt out a little pocket watch as well, because he must have his watch :) I've found perfect white hair to use for him as well. I'll post any updates in the rabbit progress as I create him. I'm taking my time on this project because I want to do it very well.

At the same time I was making him I went ahead and made the tiniest little red cap mushrooms for a section of the rabbit hole knoll that had a little dip in it perfect to tuck tiny oddball mushrooms into. Here is a picture of the rough unfinished little mushrooms which are smaller than a pencil eraser in size. 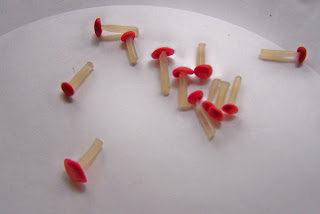 I've purchased an unclothed, wigless Heidi Ott doll from Switzerland to recreate Alice with. I'm learning to sculpt slowly but surely but I wasn't up for sculpting a person yet. The most I've done in that capacity is to sculpt ghostly disjointed lady arms playing a piano. So needless to say I figured it would be best to stick with a purchased doll. This doll is hand-painted though, and fully poseable so I can seat her at the table I've made. She will be reaching for a bite of mushroom laying on the table. So this really was the only way I could go by way of a doll for this project. I'll post a picture, of the doll with the Tibetan wool hair I've purchased to wig her with. I think it resembles Alice's hair in the movie pretty closely. 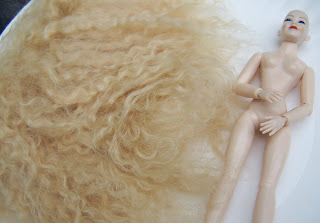 I've ordered dress material to dress her as closely to the Alice in the movie but it will be long-sleeved to cover the joints of the doll's arms.
I need to try my hand at sculpting the Absolem caterpillar soon. I plan on putting him smoking his hookah pipe on top of the largest mushroom surrounding the opening of the rabbit hole. I have so much to do to this project! I still have to sculpt objects that will line the interior of the rabbit hole as well, and figure out what type of tiny light to run up through the bottom of the project in order to cast a slight glow from the inside of the rabbit hole and illuminate the objects inside it. All that plus I have to cloth the rabbit and put him peeking out of the rabbit hole. This will take me some time but I really feel like it will be something special when it's done :)
I'll add more updates to this blog as I work on the Alice project. 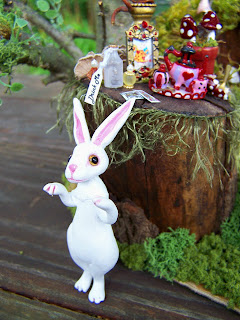 A little work done to the white rabbit, he has eyes at least :)  I have so much more to do to him, like clothes. 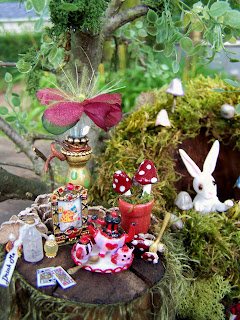 A sneak peak at the incomplete woodland table setting, with wonderland-ish items like a petal lamp with green dots.  A pot of red spotted mushrooms nearly cry "eat me" :)  It looks as though Alice will be taking a bite soon of the one laying on the table considering a fork sits in wait with a bit of mushroom on it :)  A queen of hearts tea set sits near by.  I've just sculpted a tea cup to sit on the table but it isn't ready yet.  I'll have to paint it out like I did the tea set.  You can see my unfinished white rabbit in the background peeking out of the rabbit hole as he will be when I have him all finished and dressed.  Even the scene is unfinished so there will be more to come in the future.  I still have to leaf out the weeping tree as well. Remember the little red cap mushrooms I posted up above?  Here they are added into the little nook in the scene that I meant for them to be in.  I think they look perfect there :)
Another update on July 12th: 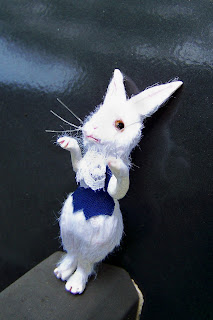 A haired hare :)  Working on his jacket right now. 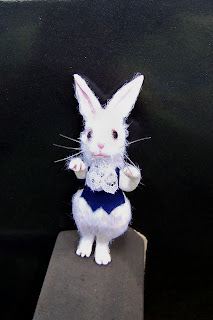 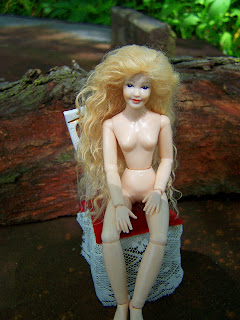 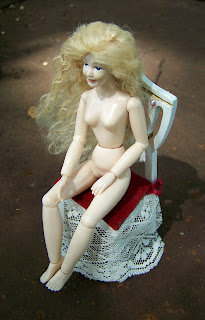 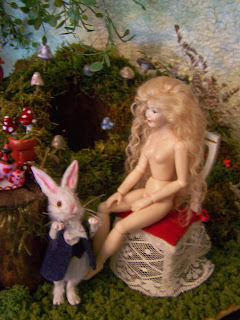 His little unfinished jacket needs sleeves,
don't they look cute together?  I can't wait for her dress material to get here!  I need to make her shoes too.
Update Thursday July 15th:
My Absolem caterpillar! 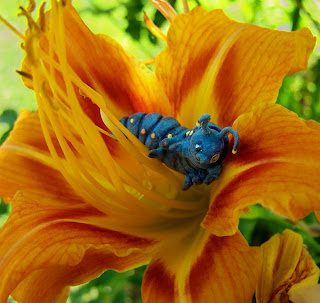 Bad pic though, much better in person!  Anyone for a hookah?
I just recovered a blue book so that it looks like Alice's Adventures.  The picture of the plain book is for comparison.  That's what it did look like.  I also made the ink well.  They both go on a shelf inside the rabbit hole.  I'll add a rather bad picture of the rabbit hole before I added anything inside it or leafed out the tree very much.  It will have an electric lit up wall sconce on the interior wall so a glow comes up through the rabbit hole.  And it will be filled with some of the items Alice fell past on her way down the hole as I think I said above somewhere.  Here are the pictures of both the rabbit hole and the book and ink well: 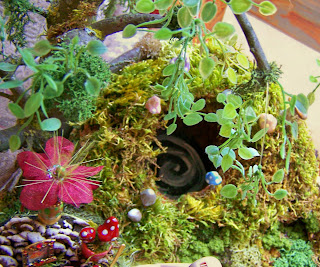 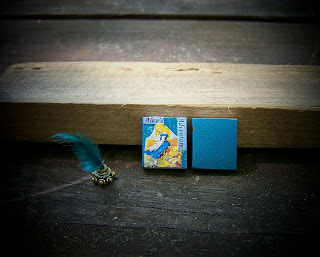 Updates as of July 28, 2010:
Hookah Pipe complete, man that was harder than I thought! 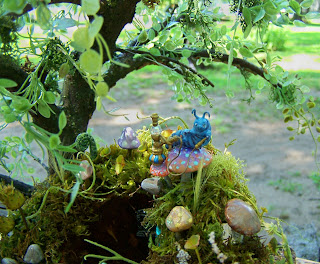 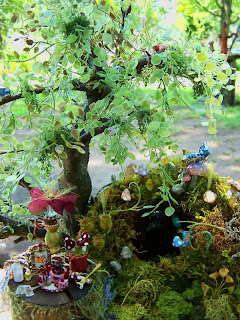 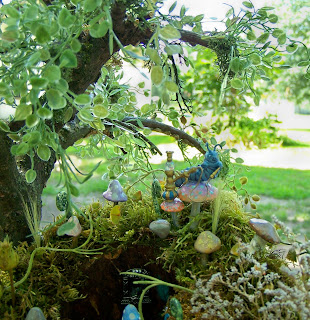 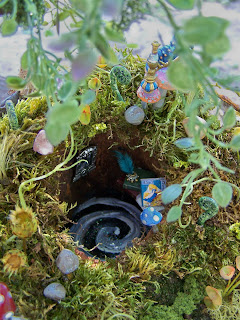 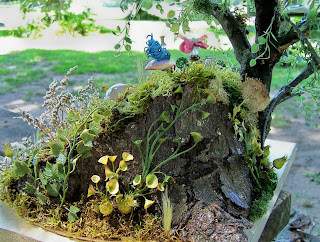 Here is a sneek peak of Alice's Dress which isn't quite done yet but is close enough to show you: 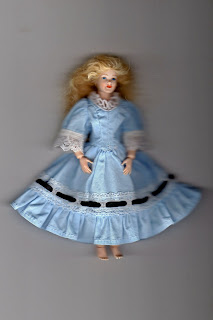 Her hair needs fixed yet and she still needs shoes made. Her lace collar will have black ribbon woven in and out of it like the Alice in the movie.  She will also have the tiny black buttons down the front of her as well.  I also have to make her wrist wraps like the girl in the movie, but they serve another purpose here to hide the doll's jointed wrists.  Shoes will cover her jointed ankles as well.  Keep in mind that this is loosely based on the movie girl, and it's called "Contemplating a Return to Wonderland".  So this will be a more mature Alice, perhaps done with her travels and wanting to see her friends in Wonderland (Underland) again.  She's making preparations to go back, let's put it that way.  That's what this scene is about, her next to the rabbit hole and getting her stuff ready to go so she'll be prepared this time.
Done dress! 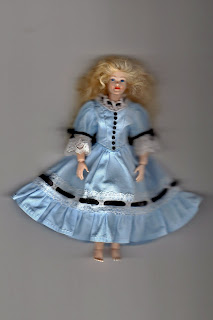 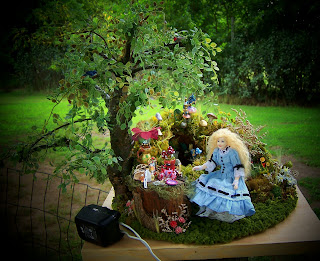 Alice dressed and seated, a power plug wired to the wall sconce inside the rabbit hole.  Just need to make a little white "eat me"cake for the plate, I need to finish her tea cup and glue it into her little hand.  I need to finish the nearly done white rabbit so he's ready to put permanently in place.  And then the wooden base with a name plaque and it's all done. 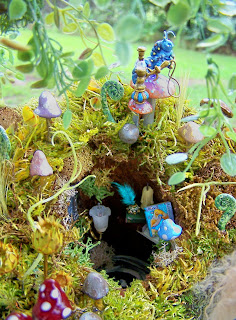 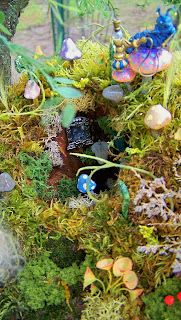 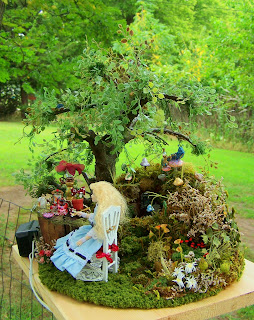 Double click the pictures if you want to see them up close. 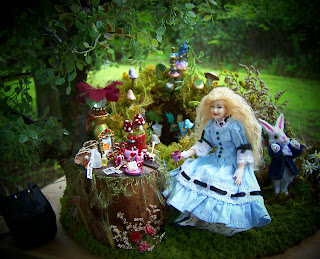 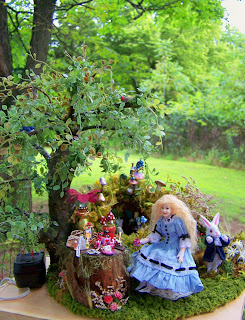 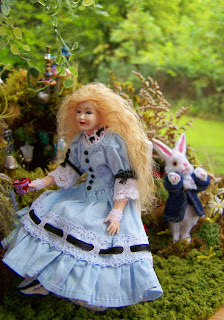 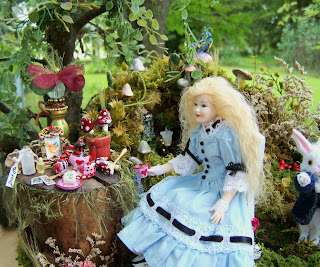