The sale of this item fell through and it is now available for purchase in my Etsy store with extended 3 week layway available:  http://www.etsy.com/listing/84909278/dollhouse-miniature-sweeney-todd-mrs 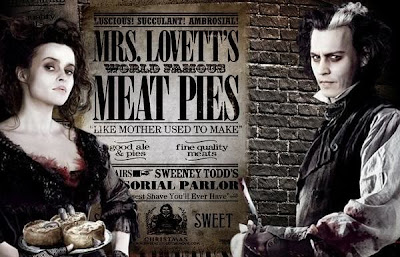 It was a long hard battle, but I toughed it out and finally finished my Mrs. Lovett's Pie Making Counter based on the movie Sweeney Todd by Tim Burton.  These pictures that I'll post somewhere along the way are horrible and I shot them in my photocube at night so they are the worst they could possibly be.  I'll change out all the pictures tomorrow morning to show a true view of all the details on this piece.  There isn't a piece on or in this that hasn't either been completely hand-made or refinished by me.  Right down to the hand-made knife and the tiny bug in front.  Size comparison on the bug?  I could fit four of them on my pinkie fingernail which is short right now.  It's VERY small and it was a beast to make!  This counter is 1/12 scale, but built slightly taller than an average 1/12 scale counter as per the one in the movie.  It's designed so that the person making the pies wouldn't have to bend over as much to make them, thus causing strain on the back during prolonged work hours :)

I found a rather bad clip from the movie of Mrs. Lovett making pies, but first you'll want to go turn off my blog's music player.  There is a clickable button on the player that shuts it off.  Here's the video:

And this ridiculous nastiness is what I was trying to convey in this piece.  I wanted to stay as true to the movie counter as possible.  That included bugs and filth :)  It's totally gross!  And for some reason this tickled my funny bone, the sheer grime and awfulness of the pies being made with bugs all over everything.  Without it, it's not the London of that particular time period for the people living in the lower class areas.  And without the gross aspect of the counter, bugs, rats, blood-to me it's not "Sweeney Todd" enough.  It had to be dirty.  I worked hard to make this thing look filthy-it's not as easy to do as it sounds!  Because it isn't dirty, I built it by hand from new wood and flawless trim and shiny new white clay :)  To get it looking like that was a chore and a half!  It took me a full week to build it myself.  The clay tile work took another four days.  No one but me would be crazy enough to start this thing from scratch and build it like I did.  I still can't believe I did it!  And I have to say this is one of my favorite pieces I have ever made and I feel a real sense of accomplishment when I look at how well it turned out.  The sign on it wasn't on there but I felt the need to put one on.  It explains the miniature to those who wouldn't know who might look at it and be confused as to why someone would try to make something look filthy and gross and buggy.  I mean there's even the bug splat from her hitting the roach with her rolling pin!  Yucky!  Now the answer is just a Google away to anyone curious enough to look :)
I guess I should just post the pictures and quit running on and on huh?  Ok please check back in tomorrow to see better photos! 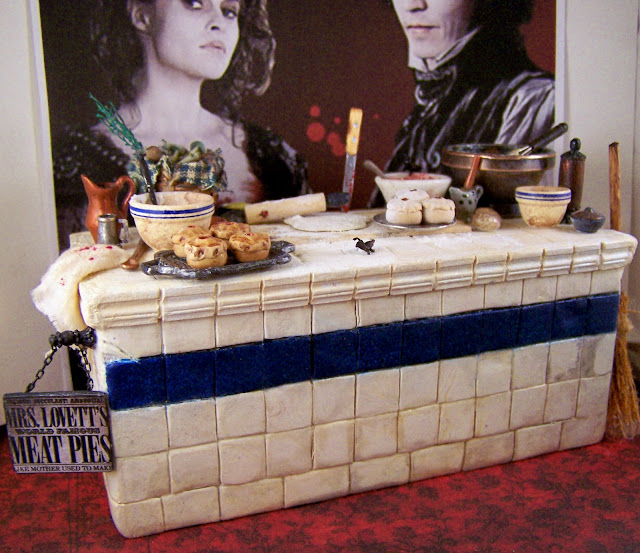 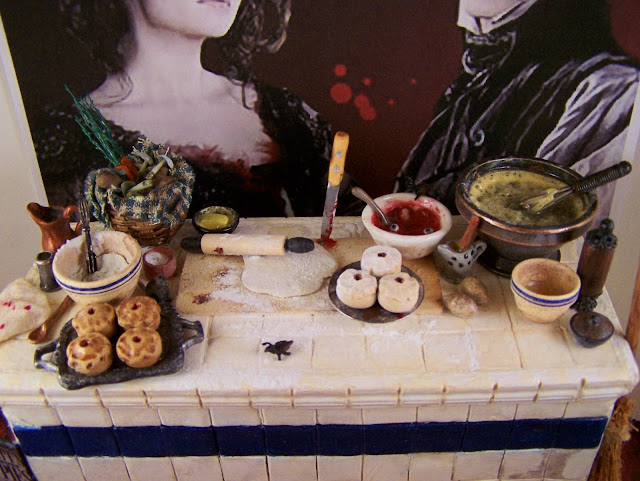 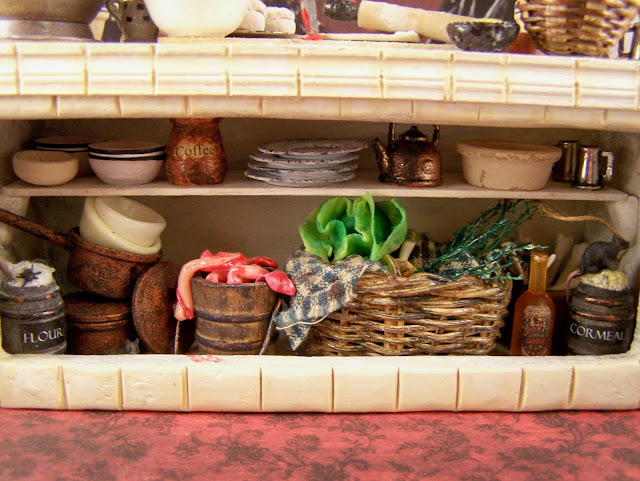 Here you can see Mrs. Lovett's gin bottle, bucket of human meat, buggy flour barrel, rat-infested cornmeal and there's lovely bucket of human bones which you can't see in this picture.  Also not seen, another rat, blood splats on the floor of the counter, etc.  Inside the basket are various vegetables that are dirty.  Another fun fact about this is that I used glow in the dark clay extensively and this thing lights up at night like it has been sprayed with luminol (I think that's the name of the blood detecting spray used by the police at crime scenes) which is quite fitting for this miniature!  It looks cool in the dark too :) 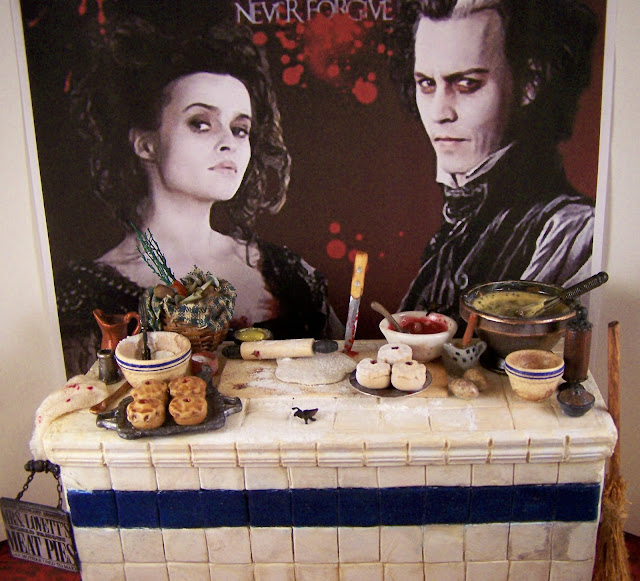 Like I said, there will be 100 percent better photos tomorrow that will really show the quality of the work and all the gory details :)  Please come back when I have better pictures available!  These make me sad :(
Updated with new pictures here: 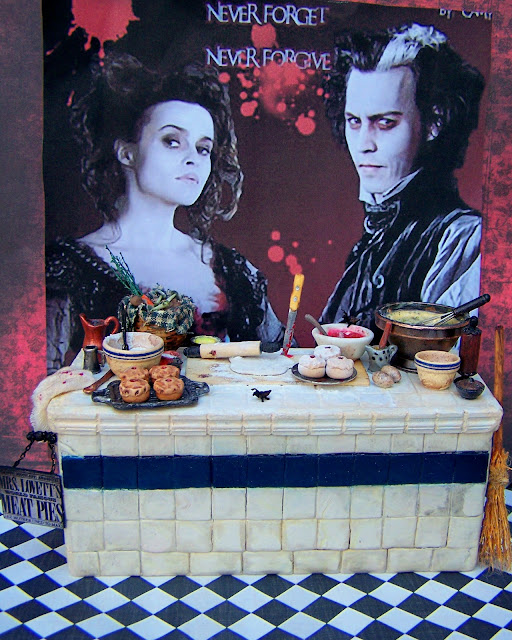 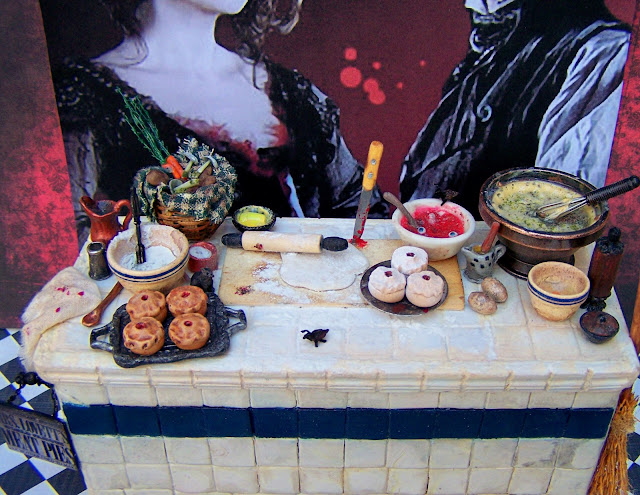 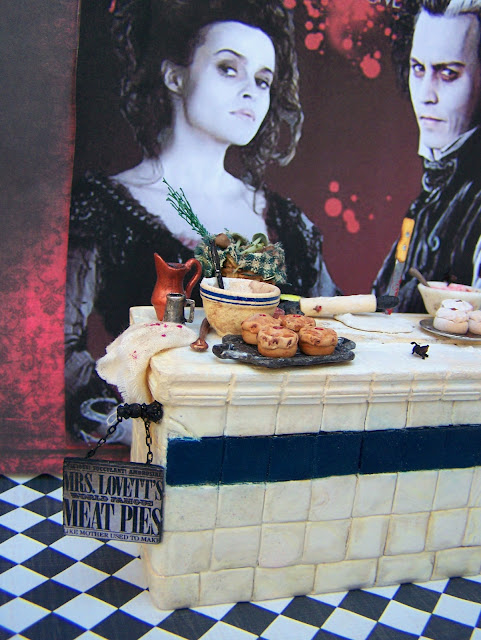 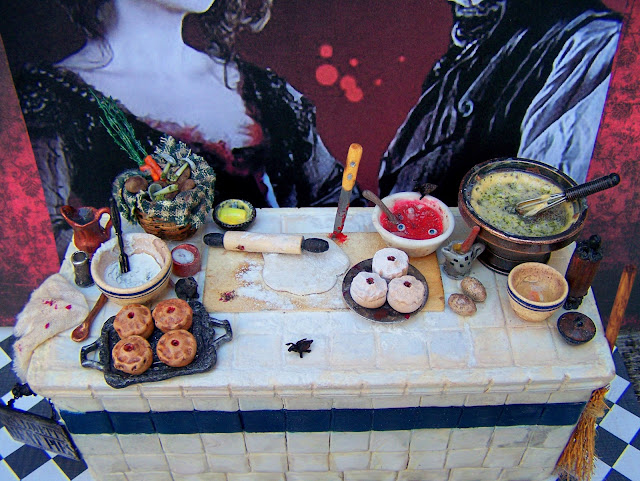 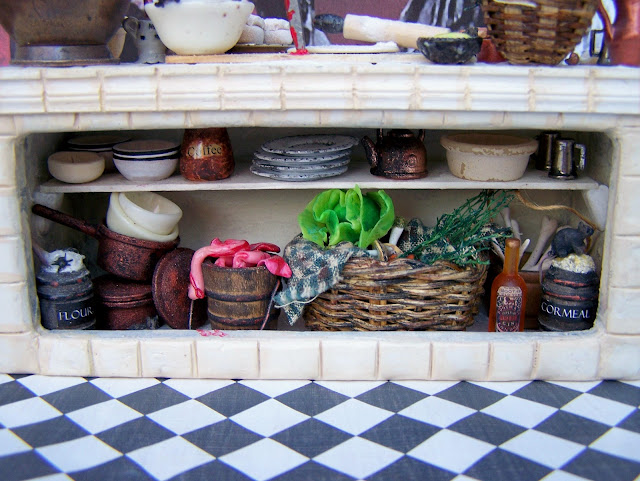 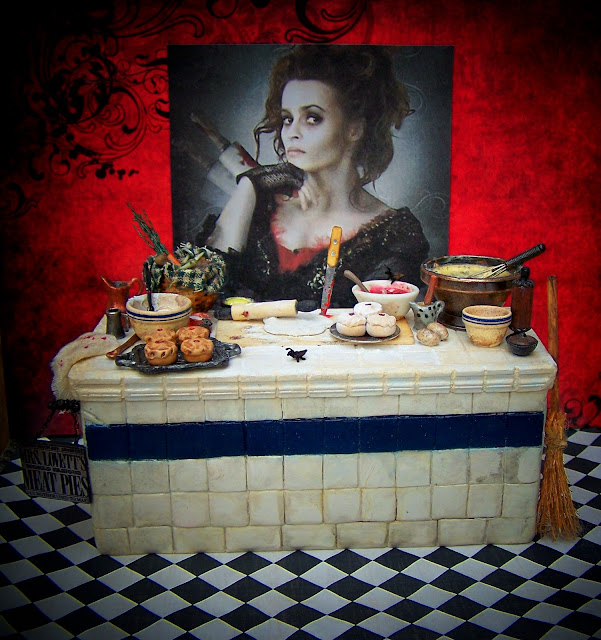 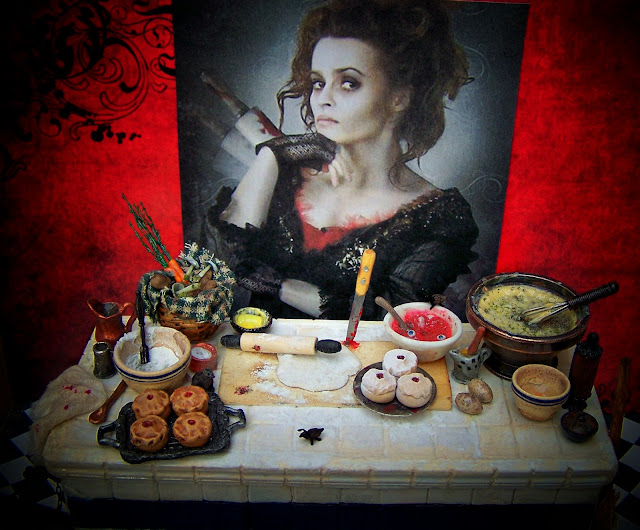 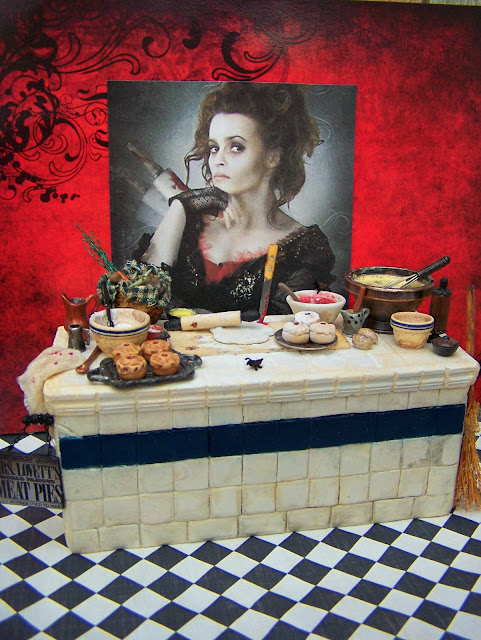