Icky Zombie Giraffe Rampage! And other such nonsense :)

Ok so I told you guys I had a custom order for a lady who wanted a zombie giraffe? I am SO GLAD it's done! It was really difficult to sculpt, and even harder to decorate. It was beyond anything I've ever had to make thus far in the eight months I've been making things and selling them. This was a HARD build! But at last...here it is! Drum roll.............
﻿ ﻿And then I REALLY got carried away!  I wanted to make him beautiful and gross at the same time :) 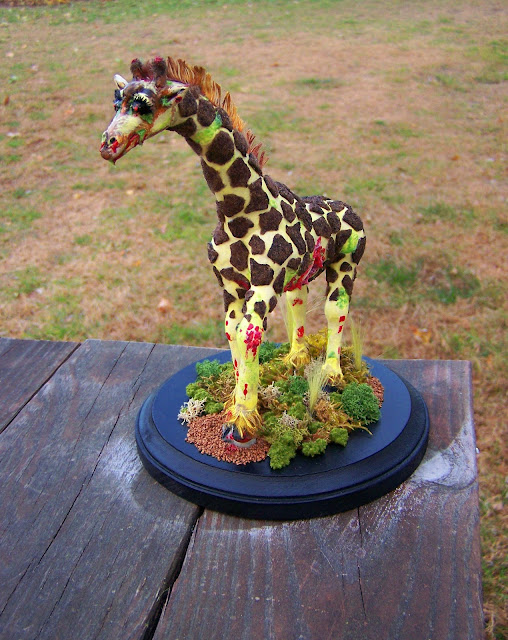 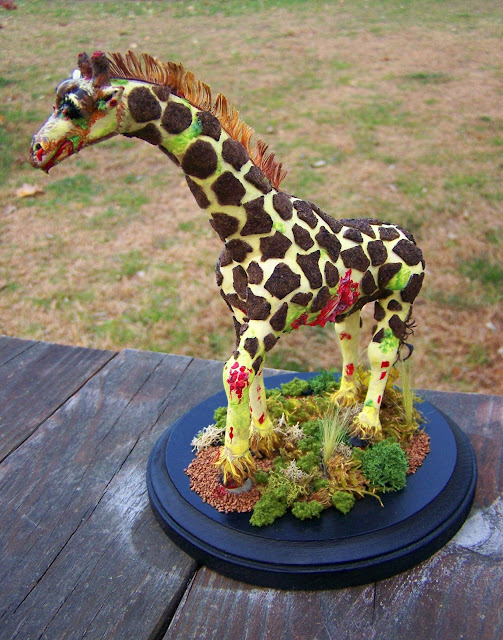 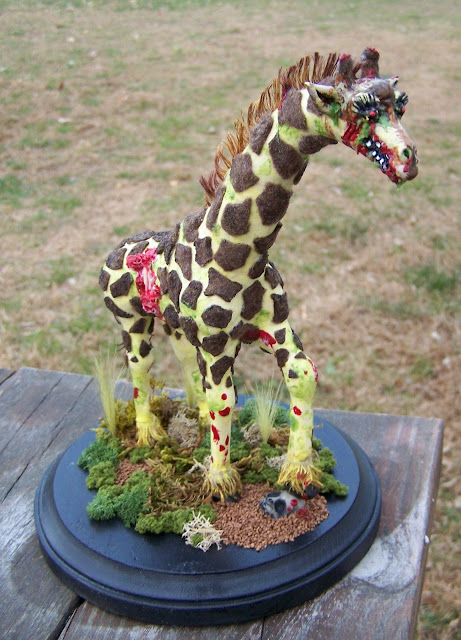 I think my customer will love him, he's exactly her type of thing.  She likes zombies!
Ok then, now I'm working on a rather large custom order for one of my clients who saw the blog on Alice in Wonderland roses and fell in love :)  I have to make 9 roses, some potted and some unpotted for window boxes.  I'll post them as I make them but they won't be available for sale because they are a custom order like I said.  But it's still fun to look, especially since they will be of various ages and attitudes as well as colors.  I started a yellow rose tonight, with a middle-aged woman's face.  We'll see how she turns out after awhile.  I know the juvenile ones are quite popular so I'll be doing some of them as well in a variety of colors and types of rose.  Should be interesting!  But nothing could be a more interesting sculpt than trying to put together out of my own imagination a zombie giraffe!  I doubt I'll ever have anything crop up like that again!
*****Now about the giveaway...when I reach 50 followers I'll begin making the most voted for items on the poll (which is not working so just type in your choices on that poll)  regardless of what I'm currently working on.  I can work on my free time on those items for the giveaway.  I will be giving away three items.  We will randomly draw 3 names out of a hat and they will be our first, second, and third winners.  So please don't forget to leave your choices of what you'd like on the blog post for the giveaway so I know what I should be making.  Right now it looks like the detailed, boxed potion bottle is winning.  Alrighty, if you don't say what you'd like then it's hard for me to know what exactly to make!
Posted by tarayvonne at 11:46 PM