I'm lacking one single piece that's on it's way to me in the mail right now, otherwise this would be done and listed.  I'm not sure if some of you remember that my MIL Sherry has said she wanted to create the memory bottle cabinet in Dumbledore's Study next to the Pensieve?  Together she and I plotted a way to make it successfully.  It's no small feat, the cabinet was highly elaborate.  Sherry bought some parts for it, but she's been having some health trouble and doesn't have a lot of energy right now.  So she brought the parts to me and allowed me to try making it instead.  I picked up the rest of what was needed and gave it a go.  And by some funky twist of fate, I was short one piece off the back top trim.  Grrrr.  Anyways, it's on it's way to me and hopefully will be here soon.

Let me first show you a video of a shot of the cabinet in the movie, and of course mine isn't quite that high because of miniature room space limitations.  I had to keep mine a little shorter on top.  But the design is very similar.  I did my best on a truly hard thing to recreate.  The whole thing is custom built.  And honestly it wasn't cheap to build at all!  I have over $110 in materials here in front of me, including custom miniature glass bottles from the Ukraine that were quite expensive.

Before you watch this you might want to go over on the right side of my blog and shut off the music player.
http://www.youtube.com/watch?v=6GPS8Xe8wIU&feature=player_embedded

So without further ado I'll post what pictures I have.  This cabinet is the same all the way around so you could literally pick your favorite view of it. 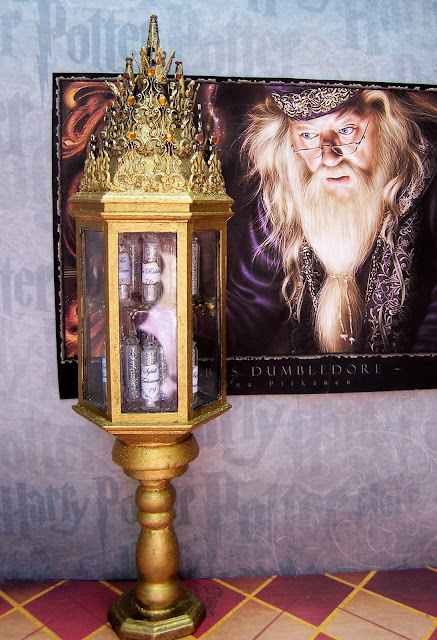 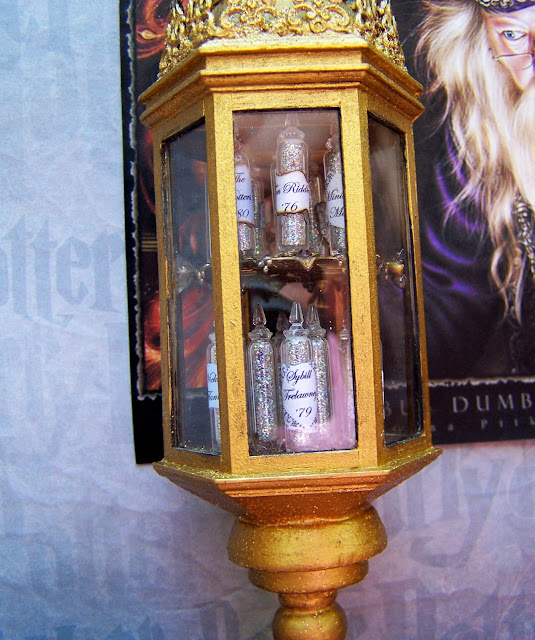 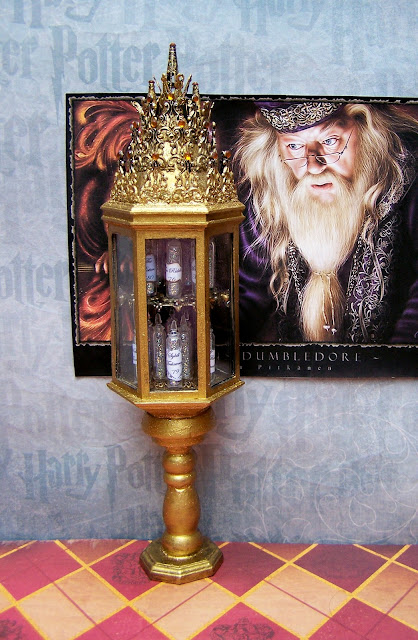 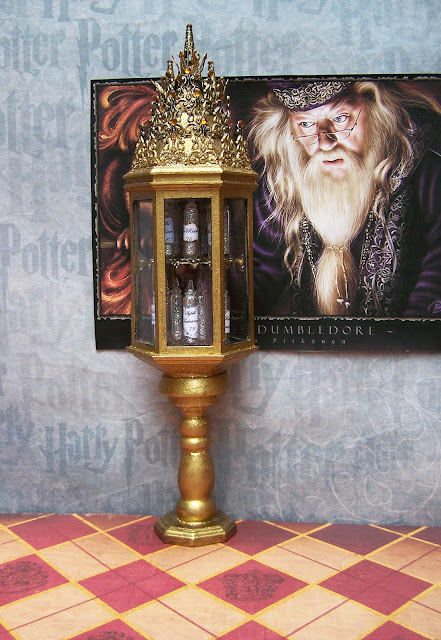 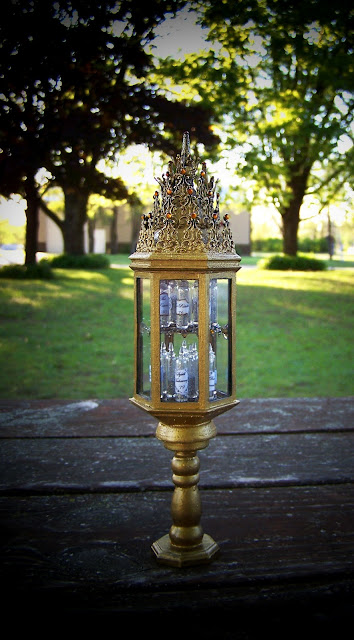 Of course I'll shoot better pictures when I get the last piece on.
Thank you all for your wonderful comments all of the time!  I really love hearing from you :)
On a side note, I have to share a rather unusual recipe with you, hehe.  Here in Illinois each late spring brings the great morel mushroom hunt.  What exactly does a morel mushroom look like?  This is it: 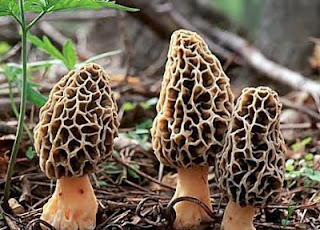 Now you may ask why anyone would want to go looking for these things?  Because they can be cleaned, breaded and fried and the flavor is something to look forward to the entire year.  Masses of people go trekking through the woods scanning the ground in an effort to find these rare mushrooms which are once a year oddities.  It's not as easy as it sounds!  They blend into the forest floor which is covered in leaves, etc.  It can take hours to find enough to cook a batch.  Are they worth it?  Yep.  But what are they not worth to me and my husband?  The massive poison ivy rash that breaks out all over both of us when we venture into the forest.  And the hunters of these mushrooms fetch upwards of $20 a pound or more for these little things!  And yes, they do get that much for them.  Like I said, they're worth it.  Luckily my husband came home with a recipe from a friend for "fake" fried mushrooms.  So we tried it out.  We started with these 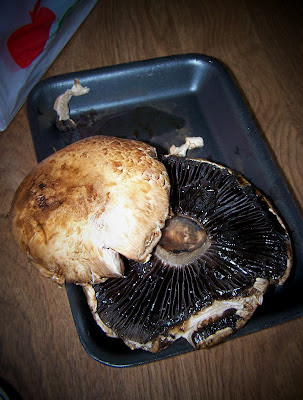 which are portobello mushroom caps from the grocery store.
We chopped them up finely like so: 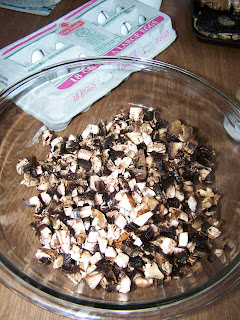 and to them we added a can of cream of mushroom soup, finely crushed saltine crackers, an egg to form a rather sticky and lumpy paste that is best dished into your breading bowl with a spoon (not your hand).  You must add enough crackers to make it so that the mixture holds together to form into mushroom shapes without breaking apart.  Or you can make patties out of it.  After you drop a lump into the breading bowl, scoop up a bit of breading and pour over the top of the mushroom mixture before you touch it or you'll be a sticky mess.
Here's our bowl of ingredients before mixing: 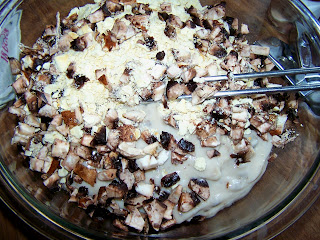 I took another dish and put more crushed cracker crumbs and some flour, and then I formed mushroom shapes and dipped my little mushroom patties into the flour/cracker mixture.  On the stove I heated a stick of real butter in a frying pan.  In went the little mushrooms and away they fried :)  I had to make enough for an army because half my family showed up to try them out.  Three packages of large mushroom caps, one large can of cream of mushroom soup, several small packs of crackers and an egg went into mine and made a whole lot of mushrooms.  There wasn't a single one left in the end so I guess they were a hit.  And yes they were a very convincing copy of an actual fried morel mushroom :)  These look awful but they're actually very good: 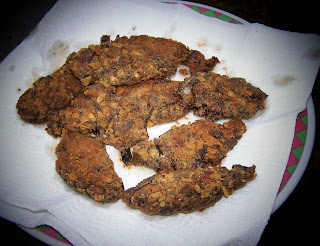 Posted by tarayvonne at 2:39 PM