Remember the bad guy at the end of the first HP film?
Quirrell then sent a forged letter to Professor Dumbledore summoning him to the Ministry of Magic to get him away from the school. He went after the Stone, but was followed by Harry Potter, Ron Weasley and Hermione Granger — though they believed their enemy to be Severus Snape.   Quirrell non-verbally bound Harry and summoned a wall of fire behind the door to prevent him from escaping, then, on Voldemort's command, forced Harry to look into the mirror. Harry saw his reflection with the Stone in his own trousers' pocket, and felt it indeed being transferred to his real pocket. When Harry lied about what he saw in the mirror, Quirrell unwrapped his turban to reveal Lord Voldemort's face, bound to the back of his head.

Quirrell and Harry struggle for possession of the Stone.  Quirrel's life ended then, when Voldemort forced him to attempt the murder of Harry Potter (figuring out Harry had the Stone and being unable to persuade him to give it willingly). Unfortunately, the body Quirrell and Voldemort were both sharing manifested in burns and blisters during his fight with Harry due to the protective power Harry's mother left in his skin when she died for him. Harry collapsed from the pain in his scar, but Quirrell's body was burnt so horribly that Voldemort dispossessed his body and left him to collapse and die. However, despite being effectively turned into a living Horcrux for the last year of his life, Quirrell did not ultimately lose his soul, having even tried to put up feeble resistance on occasion (in spite of the fact that Voldemort was far too strong for him).

Inspired by this scene from the movie of Professor Quirrell holding up a large iguana: 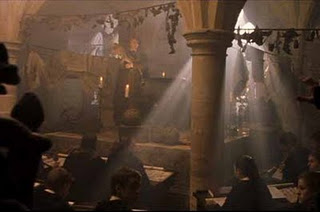 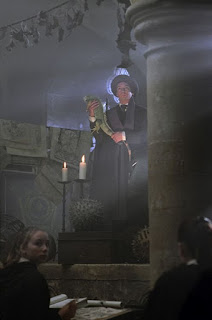 I decided to try making a wizard-style iguana enclosure.
I was working on the rabbit hole scene, and turned out a very good fireplace and managed to get it wired so that it would light, as well as a small table with a working light on it that will light at the same time.  Then I started the chimney part that curves up and around the wall-hit and snag and messed up.  I pulled it off and have to start a new one.  I decided since I was frustrated that I had better put it down for a little while and make this.  I don't want to do a bad job, so when I need a break from it I'm going to take one :)  The fireplace itself was completely hand-sculpted with a working log set inside that looks on fire when it has power running to it.  I was proud of how it came out, until I started the chimney and messed up.  But the mistake is gone now and waiting for me to try again.  And try I will now that I have this mostly done.  I didn't add on the front window glass because I didn't want the glare from the camera showing up on it.  So as soon as I get back from town I'll put that one and list the iguana for sale.  Here's how I did: 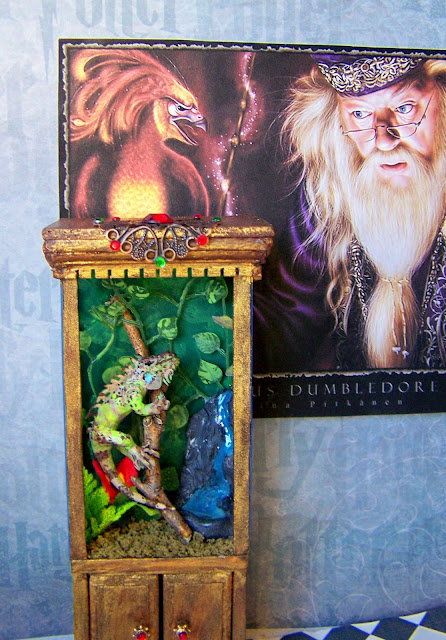 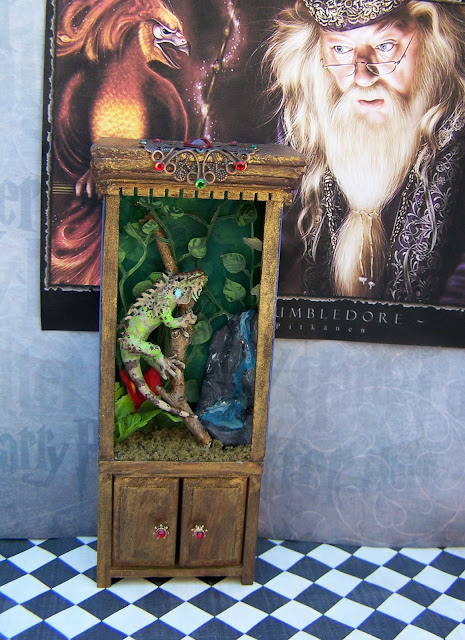 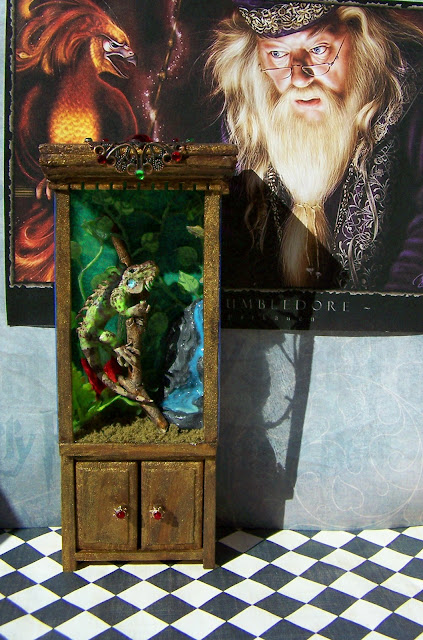 So I'll add a couple things of feed underneath the cabinet as well.  And yes as always this looks so much better in person!