Family interruptions aside, I've been working on these two orders as I can.  I think my Father thinks that now he's retired he might as well move into my house full time :)  My house has always been family central because it's the biggest in the most central location for everyone so yay me :)  I get everyone all of the time.  I guess that's what I get for putting in a large sectional sofa and two large flat screens complete with two game stations.  My house is the funnest apparently!  So I've been fighting for time to work in between dealing with everyone and cooking for extra people a lot.  I think I'll have the pie oven done in two days time, although you can't tell it from the pictures I'll be posting.  Right now it looks a bit rough and I have quite a bit left to do.  I've made a rough door but it needs to be clayed and painted and then hung so it will look really different in the end.  But I did manage to make two seperately swinging doors and the hinges will be partly hidden by clay in the end.  The coal fire is also in, although I forgot to turn the lights on while I shot my pictures outside in the freezing cold!  But it does indeed light up and the bulbs flash when you turn on the on button.  When I get the oven all done I'll turn the lights on before I shoot the pics.  Still left to do:  make the pies on the baking tray and add it inside above the fire, trim out the door and add metal rivets to the outside of the oven, clay the door and paint it out, detail clay the round little door that's on the front of the door and paint it, and make a coal box cover for the battery pack and wires to hide them from view.  So I have plenty to do and I've sworn off my company for awhile so I can get some work done.  They seem to forget that I have this to do as well.  Anyway here's what I have done so far: 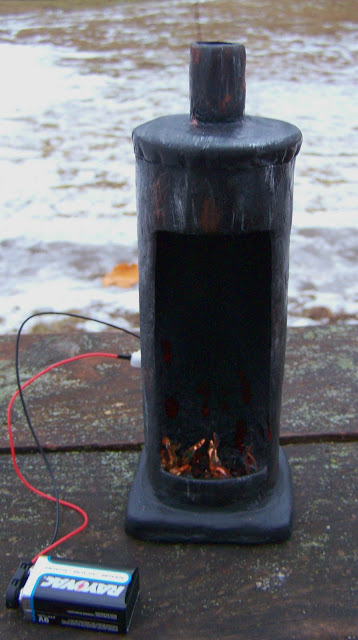 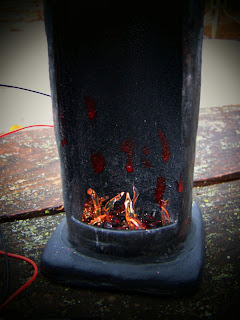 It must have some blood inside, after all this IS Sweeney Todd themed :) 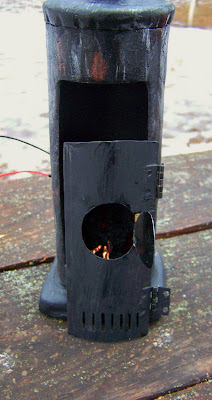 Like I said, still much to do.  I'm going to tone down the rusty-look parts of the outside because they seem a bit too much.  So I'll dabble some black back over that.  The rough-looking door will be clay covered, the hinges will be hidden mostly, the round door will be clayed to look like the one from the movie so it'll look way different, and I have some work to do yet on the paint all over the oven.  Not to mention that pie tray with meat pies and some blood dripping :)  It'll be so different when it's all done.  Plus these pictures are just plain awful.  It's so fun taking them outside in this frigid weather!
They look pathetic every time right now :(
And as for the rabbit hole, I've gotten the floor tiles in at least.  I went with a large red and white check, as per the disney movie.  I have a few more coats of clear to put on it but I had to wait on the air dry clay to set up properly before I could paint it.  Let me just say that working with air dry clay is suckish!  I hate the stuff.  It buckles, bumps out, tries to rise up off your project, does not stick well to other dried air dry clay, likes to cut in a very messy, non-clean edge way, etc.  The floor took me forever because I had to work on the messy lines that were left from me making the lines in the tile.  Funky stuff, it's terrible to work with :(  I have learned to put down a layer of good glue before adding on the clay anywhere to keep it held down as it dries so that's good.  At least I learned something :)  So here's what I have so far:

I took me two days worth of painting to get the floor looking right due to the funky clay I was forced to use in this case.  I can't just put the whole project in the oven can I :(  Yarg air dry clay!  After I get it clear coated enough I'm off to make the talking door knob and the curtains on their little rod that goes in the undone middle of the bottom wall.  Thank the Lord I get to use actual clay I can bake!  You can see in the pictures I also built out the clay area around the top so I have more space to add the cat, flowers, grasses, etc.  The top of the rabbit hole must have Dinah looking down at Alice as she falls.  That has to be repainted, and grassed, etc.  Looks pretty odd right now.
Posted by tarayvonne at 3:18 PM