A temporary hiatus from mini making for me, but not Sherry

I'm taking a small break from mini making (other than another Coraline mini as a housewarming gift for a mini collecting friend of mine, Mrs. Gerbz who scored the lovely Red Queen dessert cart by calling first dibs :)  in order to do a little home renovation.  I'm ripping out my old kitchen-cupboards, walls, ceiling and all!  Eeeek!  Whatta mess!  I have an old two story farm house in a small farming town in Illinois and it's well over 100 years old.  Needless to say, its full of old character but needs some attention and updates.  We've begun the painfully awful process of tearing into it here and there.  This time it's the kitchen.  We're handling the work ourselves so I'm thinking I'll be a bit pooped out at the end of each day until it's over.

That being said, Sherry is working on two fantastic items, both a bit gothic in nature and very exciting.  She's claiming one of them is her best work to date.  This is a bit of a mystery for you guys-I'm staying tight-lipped about this one.  Should you like to be the first to know when her items will be listed in the store and therefore have first crack at them-I would suggest you follow us on Twitter:  http://twitter.com/#!/19thdayminis where I will post the new items right after I list them.  I am very excited about one of her items, I think this will truly be a one of a kind 1:12 scale miniature that has not been made by anyone ever.  The idea is fantastic and I'm very excited to see the finished project.  Both items would work well in a haunted house/witch house/vampire/zombie...or any gothic style setting.  In case you missed a previous cabinet of hers, here is a picture of her amazing witch cabinet that sold previously: 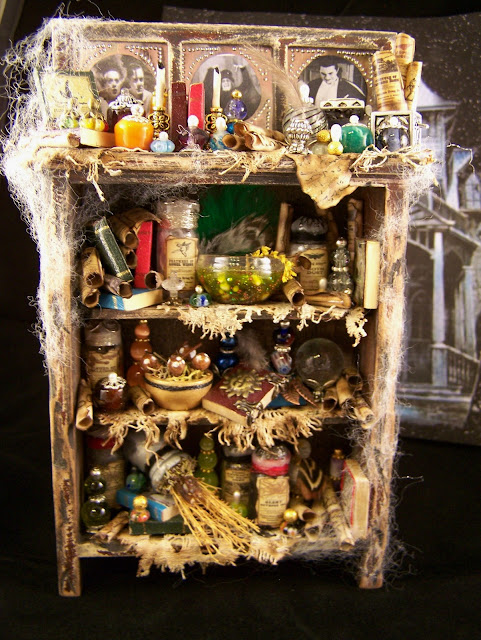 Just a little idea what she's already done and sold
so you can see how much work goes into her gothic pieces.
This one didn't last long before someone snapped it up.  I think it may have made it a whole week before it sold :)
Anyways, I'll be back with new and exciting projects as well as the Red Queen cabinet when I get somewhere on that.
And as always, in my store:  http://www.etsy.com/shop/tarayvonne
there is always layaway plans available for the asking-just contact me and we'll set something up.  So should you like what Sherry makes you can be the first to get it by letting me know you'd like it and I'll let you lay it away :)
Posted by tarayvonne at 6:13 PM