I sold my last theme tree, and I still have orders for two more custom trees.  I'll post updates as I make them.  THANKFULLY though I am good to start some other projects.  I have a long lineup of custom orders, but I'm waiting on parts to come in.  While I wait, here's what I've been up to:


1) Restoration of my extremely needy old farm house that was built about 120 years ago.  We decided to remove the carpeting because there are interesting old wood floors underneath that looked promising.  The living room looked pretty good, and we knew it would be a cinch to sand them out and refinish them.  Things WERE looking up.  And then we got to the dining room.  All I can say is whaaaaaaaaaaaaaaaa!  Carpet removal found serious issues we weren't prepared for.  Million year old nasty blue linoleum with thick black glue underneath, and what else?  A section of the original floor boards cut out to make way for a crawl space into the basement.  Holy crap!  Holy Greek Tragedy Batman!  One panicked call to my Mother revealed it's not so bad after all.  In our area there are many old buildings that have been condemned and abandoned so it'll be easy to find old wood to patch in the missing floor boards.  Apparently she's done it before with a friend who was redoing an old house.  Ok so that's good.  But the black glue removal?  That's another story.  Here's what I'm dealing with: 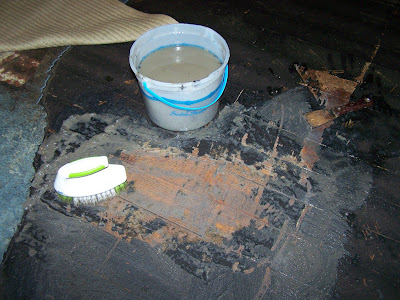 Isn't that....pretty?  ***enter the sounds of vomiting***
It only took me almost an hour to get that little spot cleared away.  I felt like Cinderella without the possibility of parol or ballgowns or dances with Princes (my prince was gone picking up the kids from a birthday party).  Considering I have a whole dining room of this mess, I think that assessment is accurate.  That flippin' floor better look like the neatest floor that ever was when I'm done with it!
2) In the middle of all this horror, I decided temporary escape was a good idea.  What's better than doing something right now?  Doing it later of course!  Procrastination is survival in my case.  So I decided to make our english bulldog Tinkerbell some homemade dog treats :)  Now I had prepared for this by picking up a squirrel-shaped cookie cutter on ebay: 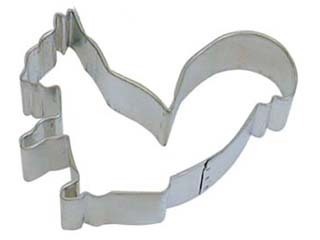 Because it's funny :)  Here's what they looked like after I used them on the doggie treats I was making: 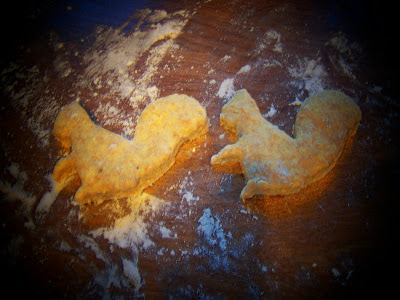 Tink decided she really loved these!  She gobbles them up and then sniffs my hand for the following five minutes and begs for more :)  Bad nighttime picture of these though.
Here's the recipe I used:
1 cup rolled oats

On floured surface, knead in remaining flour until dough is smooth and no longer sticky, 3 to 4 minutes. Roll or pat out dough to 1/2 inch thickness; cut with cookie cutter. Place 1 inch apart on cookie sheets.


Bake for 35 to 45 minutes or until golden brown. Cool completely. Store loosely covered. Makes 3 1/2 dozen large biscuits.
To this I added some leftover chicken and veggies from supper the other night.  I blended them up and tossed the goop in.  I keep these in the fridge, and they would freeze well too.
Tinky thought they were the bees knees! 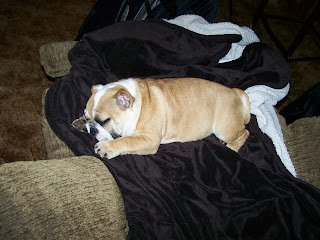 Ugh I'm so full, I'm all tired out!
﻿3)  Adventures in crafting:  I caught one of those little fairies again!  Here she is: 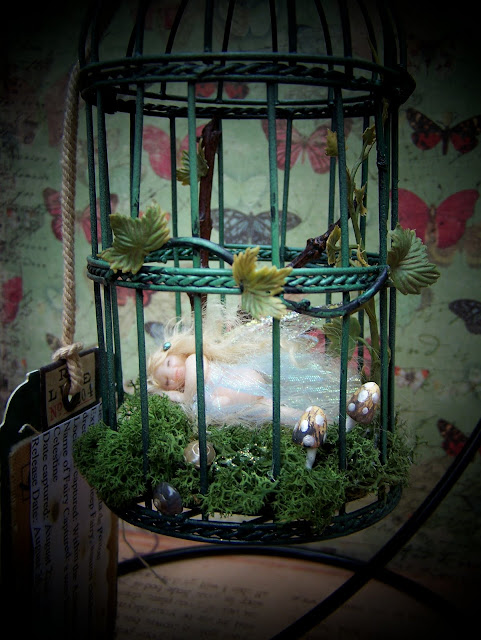 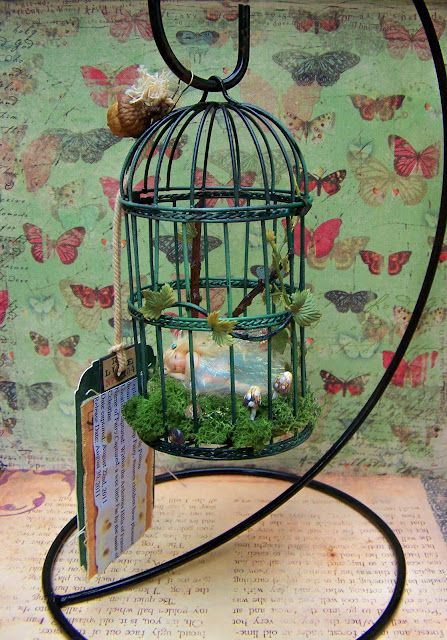 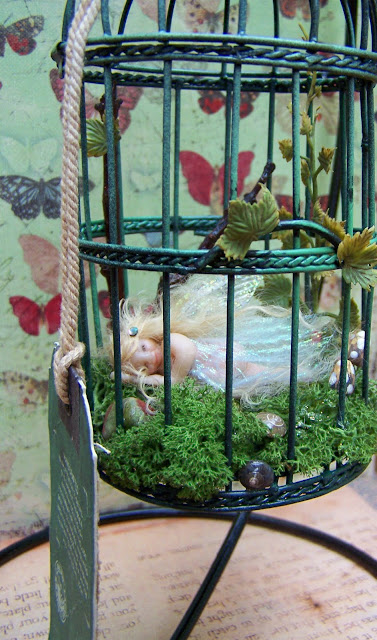 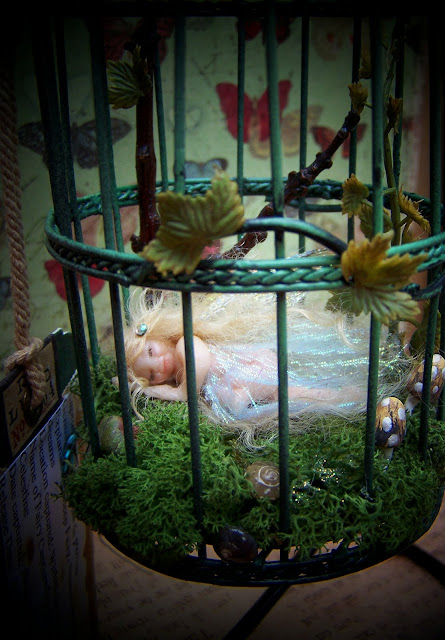 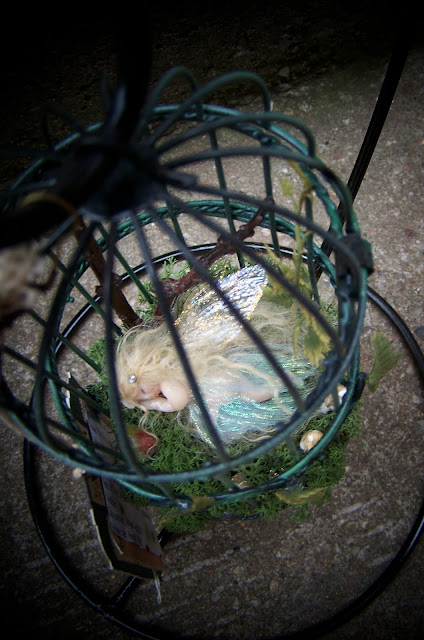 Fairy Studies-Miniature Captured Fairy Number 2 Celestine the Sleep Fairy
http://www.etsy.com/listing/80250852/fairy-studies-miniature-captured-fairy
This little fairy-who is around 2 1/2 inches long (1/12 scale), has a hang tag with her capture information on it.
The tag reads:

Location captured: Within the Ardennes Hills of France

Name of Fairy Captured: a wee little Fae by the name of Celestine

Need a little piece of serenity in a mad world? How about a little nature scene right there in front of you? Moss, mushrooms, tiny fairy hanging in her little cage :) Don't worry about her, she will be let go after she's been studied and photographed :)
Her cage is a little under 7 inches tall, it is filled with plant material such as mushrooms, grasses, moss, etc. The cage hanger stand is 13 1/2 inches tall.
She is a sleepy little girl, but hey, she is a sleep fairy after all. Her wings are real wings, glittered and polished so they will hold up (although they ARE still a little fragile, if you go poking around the inside of the cage you can break them if you aren't careful)
The fairy is hand-sculpted by Sherry, dressed, haired, and decorated by me with lightly powdered with some extra fine glitter which is also sprinkled lightly on the moss around her as well. She was just captured after all. She wears only a powder blue petal skirt with a bejeweled barrette on top. Her hair is tibetan wool and is arranged in a wild and sweet way so that she looks like natural, wild fairy with blowsy, wind-swept hair. She is not removeable and the cage does not open.


This item, as with all my other items-is SO MUCH BETTER IN PERSON. I don't have the best camera for internet posting.