The third place winner of my first blog giveaway went to Berri, and she told me she wanted a shapeshifter type potion.  After some research, I came up with nothing really but the same type of werewolf potions and shape-shifting information I had already done for Victoria.  So starting from scratch, I decided to make something up of my own.  Totally fictitious, but cool nonetheless.  I called it Metamorphosis Changeling Potion.  I built a two-section box and blackened it, lined one side with red velvet material.  Into one side went the potion bottle, the other side has an assortment of items needed to work this magic.  A small second bottle of potion, hand-dipped candle sticks, a rolled parchment, a wand.  Pretty self-explanatory, but I think it turned out nice.  I'll be shipping this off to Berri today, hope she likes it :)  And then I have two more custom orders to fill before I can start my beloved tea cart for the red queen!  I have six more roses to complete, then another custom order came in for items based on the movie Coraline by Tim Burton.  It'll be up to the customer if she would like these items, but I was thinking of doing the beetle chair and possibly the fireplace from the "other Mother's" house.  She has commissioned the bow-topped box with needle, thread and button eyes that the other Mother gives to Coraline so that she can stay in the other world forever.   This project should be fun :)  I'll let you know what I end up making when I finally get there.  Okie doke-here's Berri's prize: 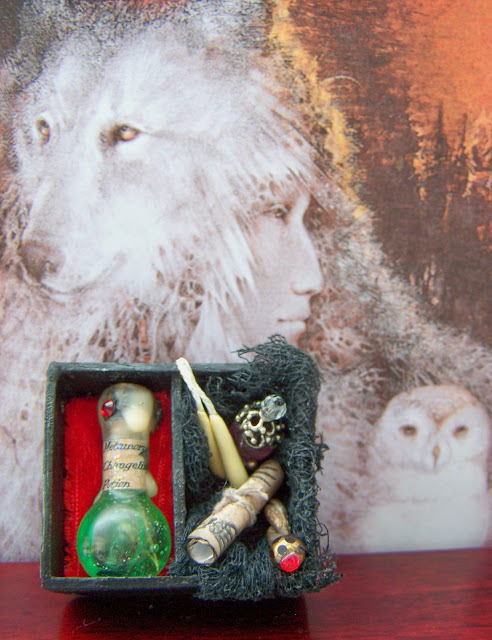 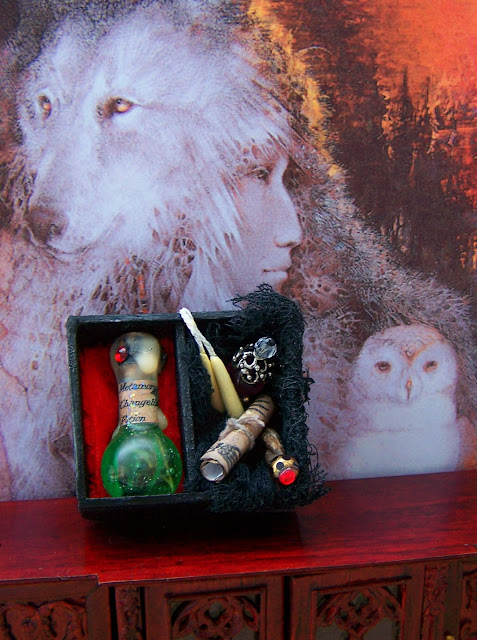