I decided to make this far more elaborate than I thought I would so it's taken longer than I planned.  But I finally finished it last night and I am so happy with how it turned out!  I feel it's my best cabinet ever so far.  This is so much better and more detailed in person, I couldn't get it to photograph well at all and it's really wonderful in person, trust me :)

Oh and by the way, this is OOAK, I can't make another like this because some vintage parts were used and I don't have more of them!

It's jam packed full of dark goodies including: a cloudy Foe Glass Mirror as seen in Mad Eye Moody's office in Hogwarts in the movie Goblet of Fire, Mad Eye's eyeball eyepatch as stolen from him by Death Eaters after his death in that same book/movie, a hand-sculpted skull wand display with 5 different miniature wands in the top of it, a real stone creature idol sculpture on metal stand, dark wizard books including one on Horcruxes and on it hangs the necklace locket Horcrux containing a part of Voldemort's soul, a labeled dragon embryo bottle, a beating human heart jar that looks like a real heart, scroll, severed creature head bottle (labeled), the gruesome hand on a pillow that grabs Harry's hand in the movie Chamber of Secrets, potion bottles, dark crystal ball, a steampunk wizard gadget with gears and hoses on a wooden stand that couldn't be photographed well-for some reason it never turned out clear in the photos but it's really cool in person. On top of the cabinet: A gothic caged owl, tall elaborate potion bottles, a very intricate large dragon embryo bottle on a pedestal stand, a large crystal ball in a pewter dragon claw stand, ghostly white-ish mosses. The cabinet itself is really spooky looking with filigree finials across the top with green crystals (for Slytherin) and a large gothic blackened metal skull and crossbones topper in the middle. The cabinet I decided to distress to look ancient and creepy, as though it came right out of Bourgin and Burkes, the dark wizard shop frequented by the Malfoys. I could see this in the home of Bellatrix LeStrange or any other of the Death Eater crew :)
Underneath the cabinet is a hand-sculpted Nagini snake/horcrux as seen in the Potter movies. I had to make her, and she's so much better in person! She's glued underneath the cabinet and is not removable. She's very well done, I took my time on her with the sculpting, texturing of the snake skin and the painting of the pattern. I referred to the movie while making her so she's as close as I could get her. Also, she's very sturdy. I have no doubt she'll be safe during shipping because she's pretty strongly made.
The cabinet is a little over 7 1/2 inches tall, and roughly 5 inches wide due to the moss sticking out on the sides. 1/12 scale dollhouse miniature.

Ok now for the pictures which really don't show how detailed this is and really make it look worse than it is in person :( 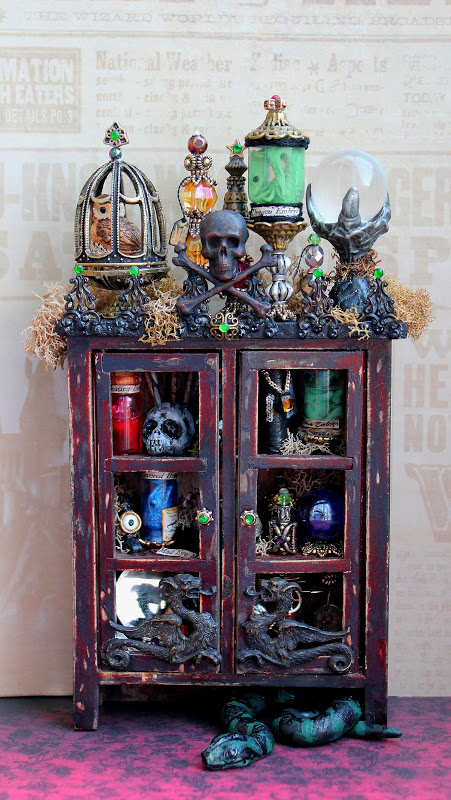 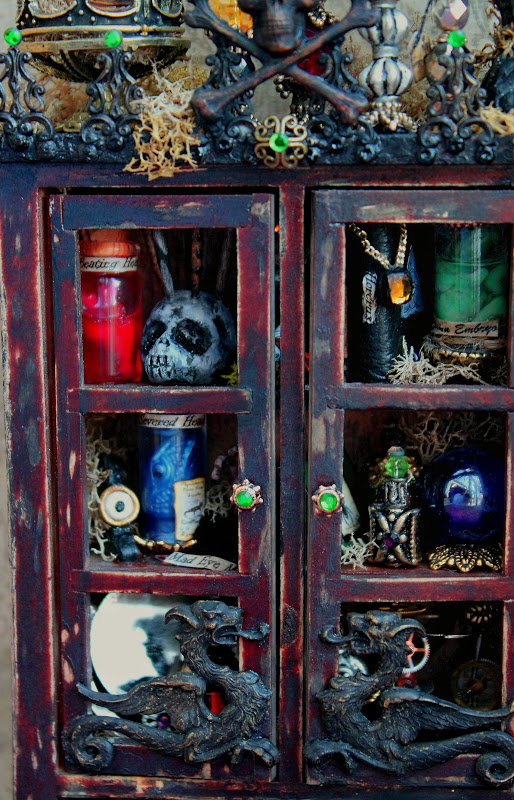 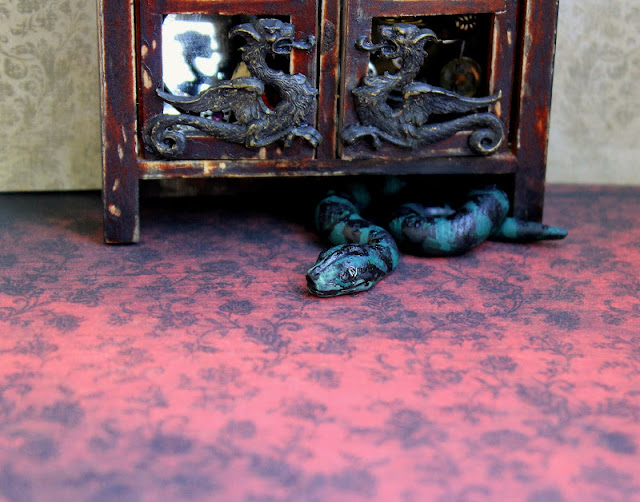 That snake looks so much better in person :( 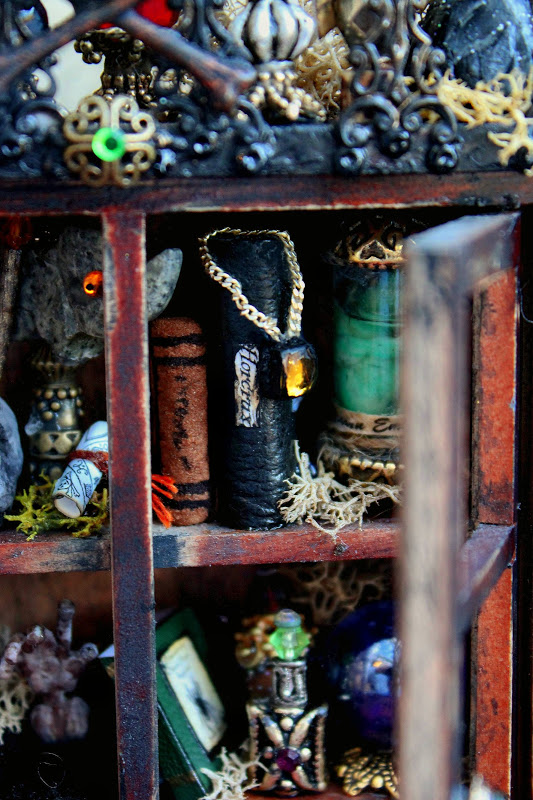 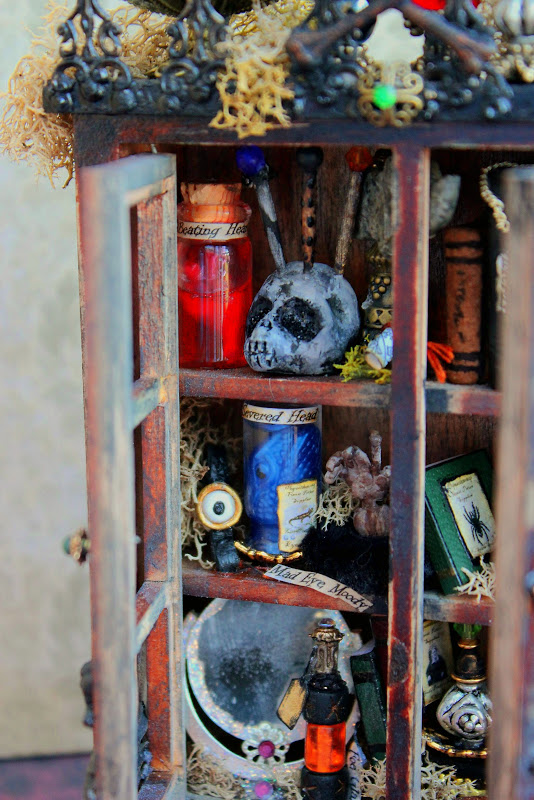 Ok the foe glass might need a quick swipe with a windex q-tip before I ship it out lol!  It was supposed to be cloudy, but not fingerprinted too :) 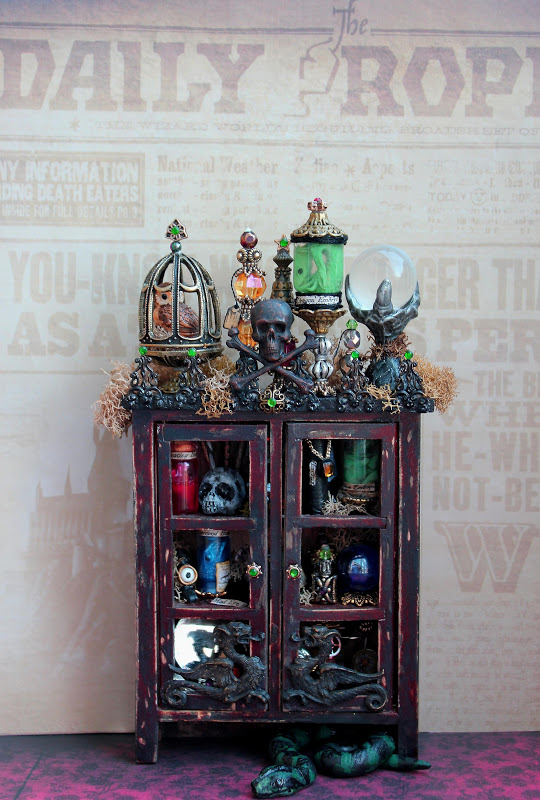 There is a steampunk gadget with gears and all that in the bottom right hand corner of the cabinet that
didn't photograph well.  And it's so cool too!  Sad :( 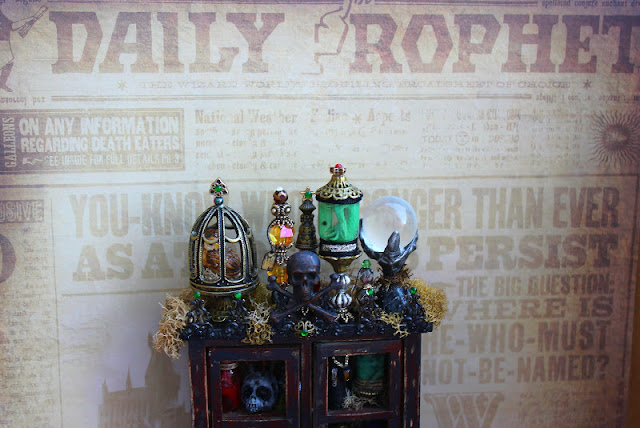 Available here in my store:
https://www.etsy.com/listing/114795224/dollhouse-miniature-harry-potter-death

Also, I've been working on Sherry's store and making some jewelry myself as well :)  We've decided to go in another direction in Haunted Mansion Jewels, and go with a more "gemstone" jewelry theme and get away from the costume jewelry so much.  What I've made personally: 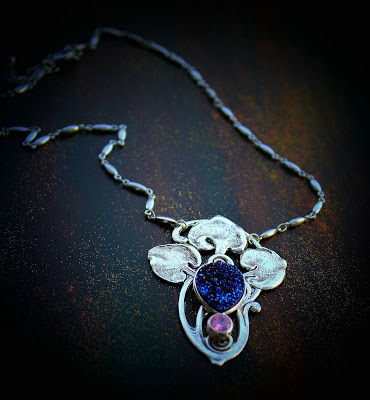 These are genuine Druzy Stones 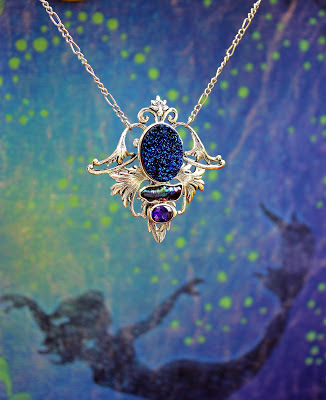 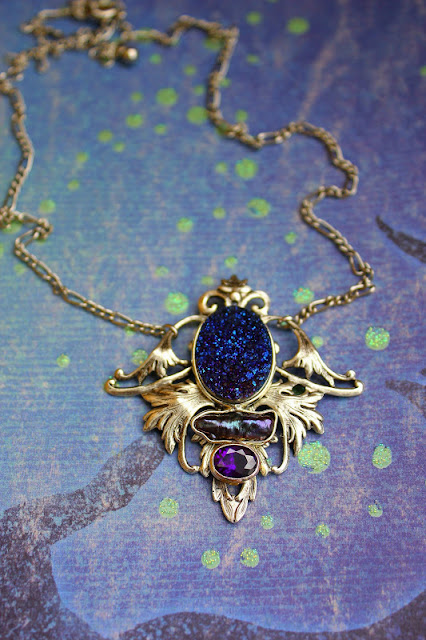 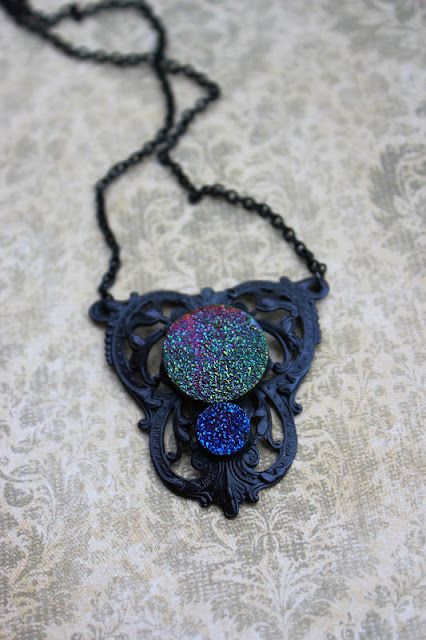 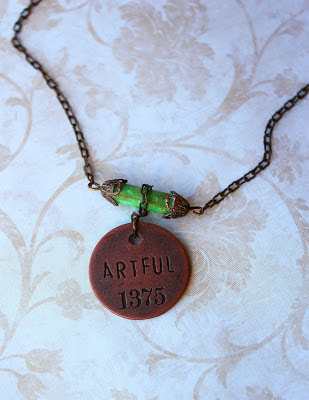 These are genuine rough Emerald crystals 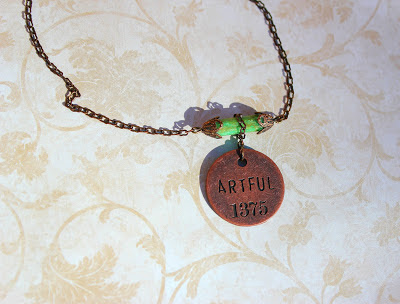 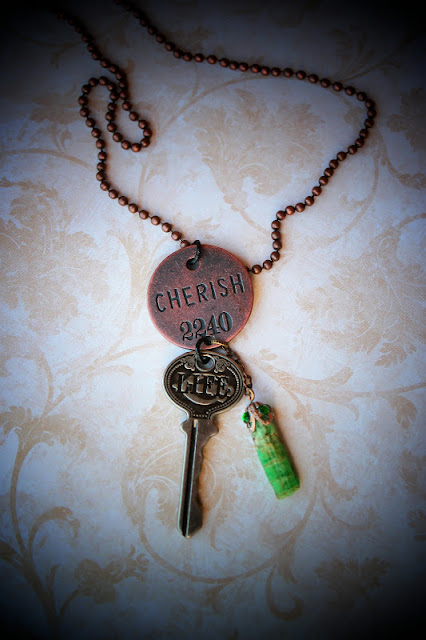 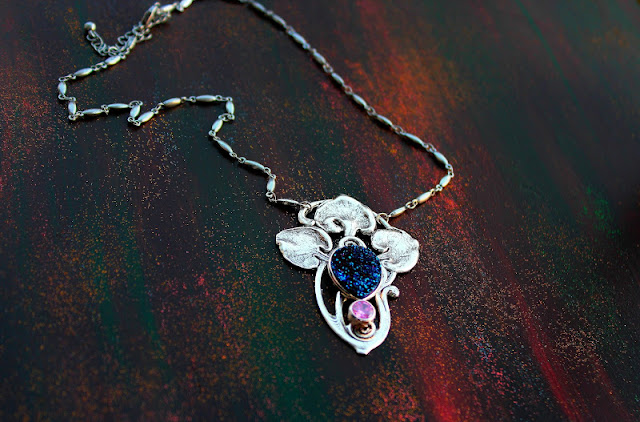 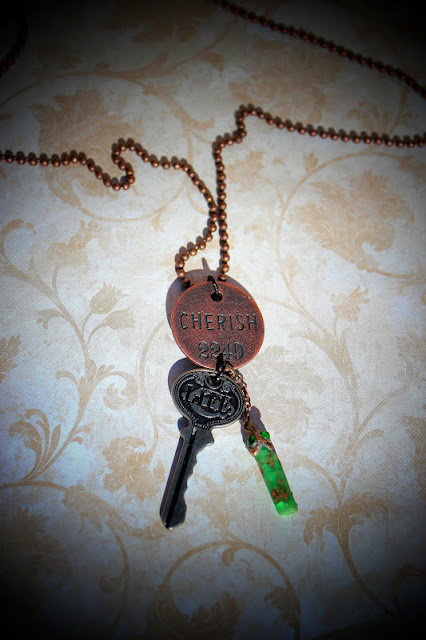 Some of it isn't listed yet but some is:   http://www.etsy.com/shop/HauntedMansionJewels?ref=usr_faveitems&atr_uid=7202128 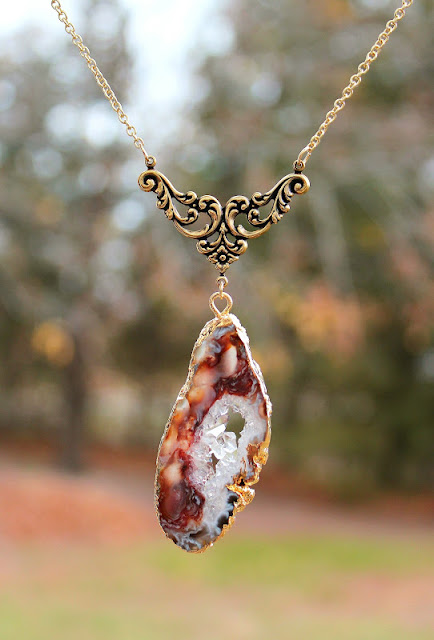 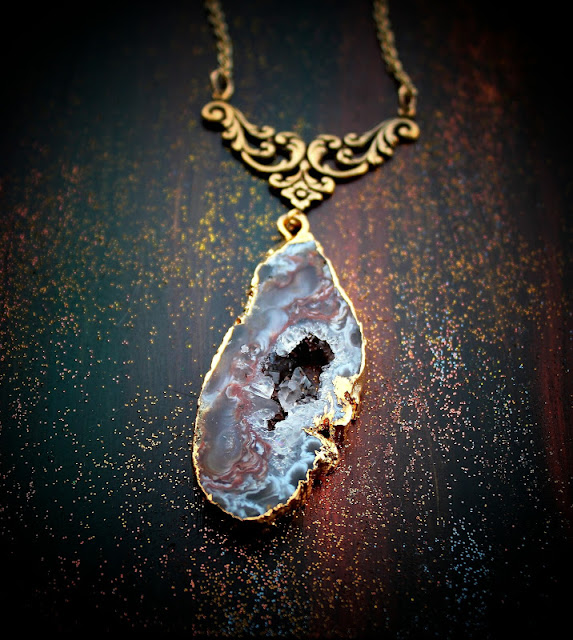 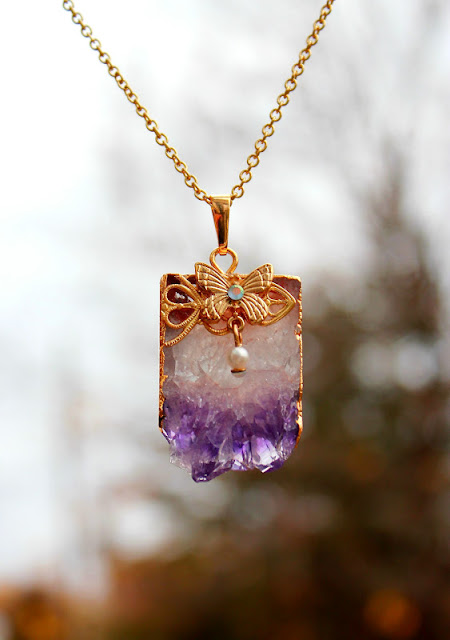 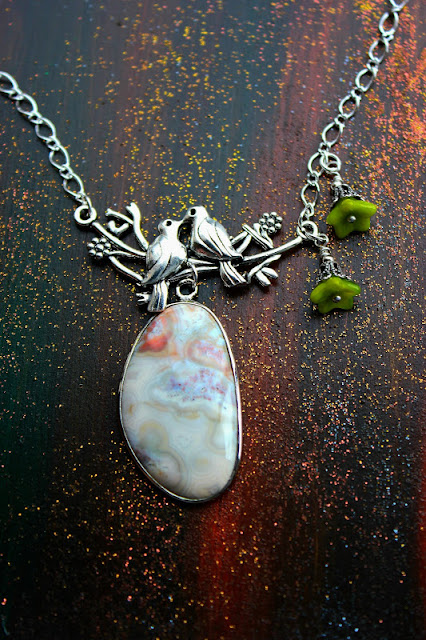 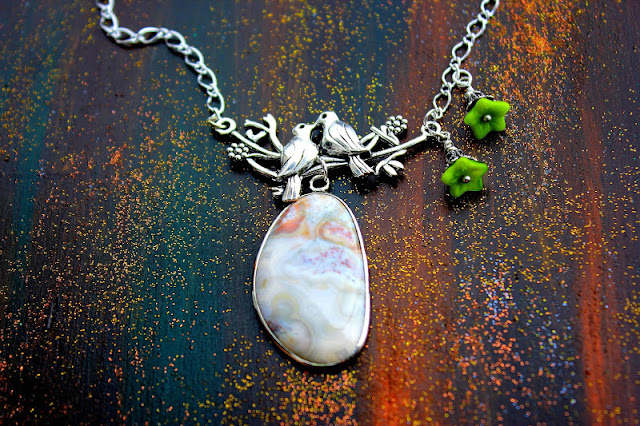 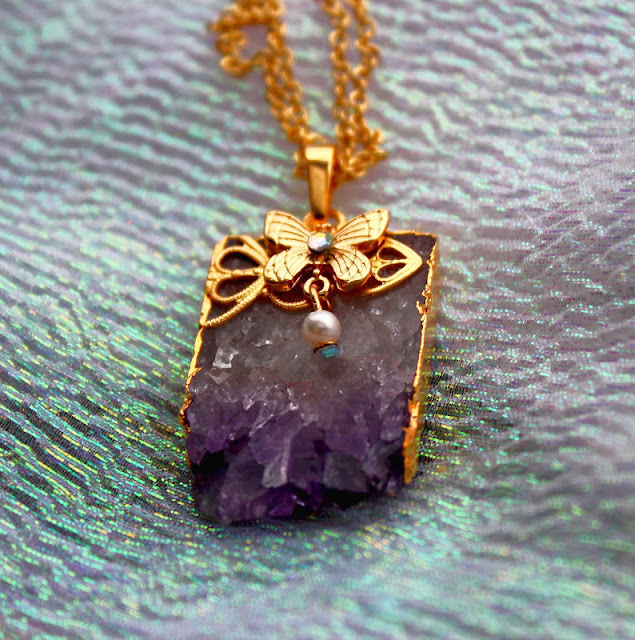 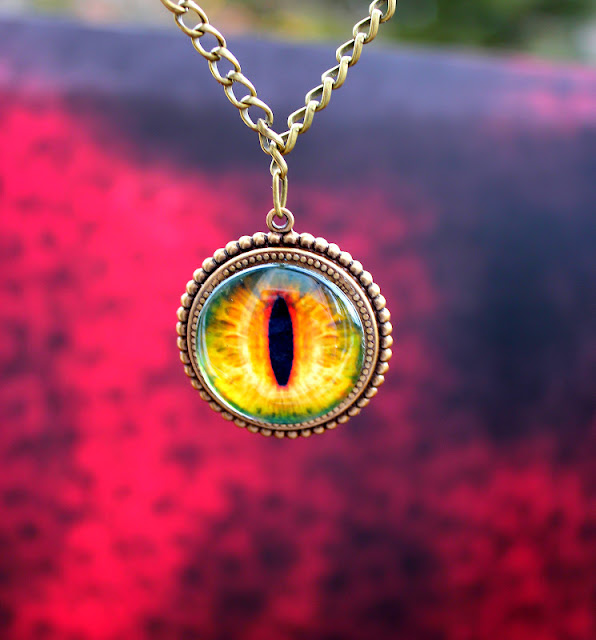 All available at the above shop link :)

By the way, thanks everyone for the kind comments :)  I love hearing feedback, no matter which way it goes :)