What I've been making since I last blogged

I have had a bunch of custom orders to get through and I've had very little time to work on anything, being so close to Christmas.  That plus a new puppy (who didn't work out and had to go back to the pound because she kept attacking my other dog and my cat.  Apparently she hates other animals :(  and finishing up work on my wood floor redo.  Plus December brings me:  My little cousin's birthday, my own birthday on the 15th on which I turned 34, my daughter's birthday party was on the 17th and she went swimming and stayed at a hotel with us and her little girl friends, her actual birthday falls on the 19th (hence the shop name 19th Day Miniatures, to which is a homage to my husband, daughter and son all being born on the 19th day of their respective months and so is my lucky number) and we had the regular family party that day, today is my wedding anniversary (14 years now, wow!), my aunt's birthday is tomorrow and then Christmas is the 25th of course.  Needless to say December is an extremely busy month for us!  So no time to work, no time to blog :(  Here's what I've managed to get done amid all the disruptions: 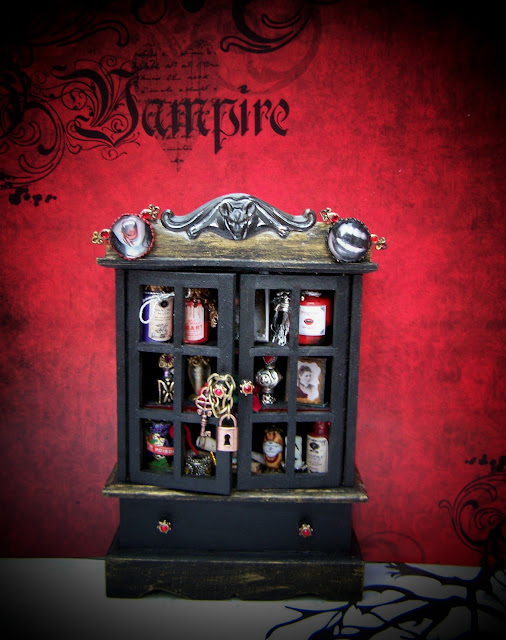 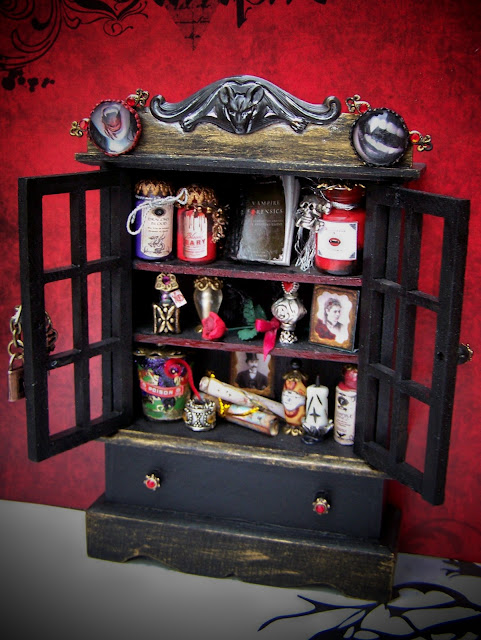 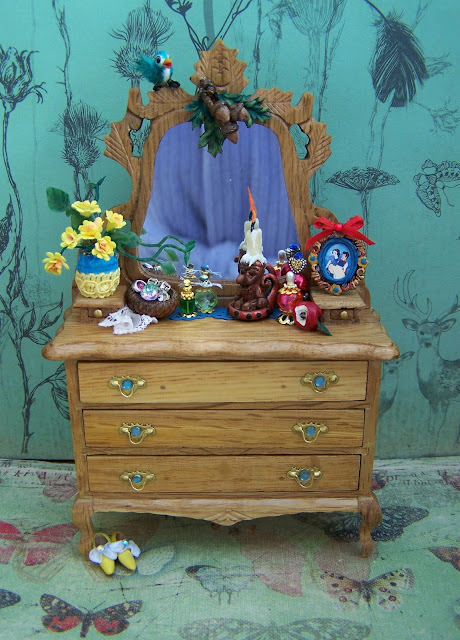 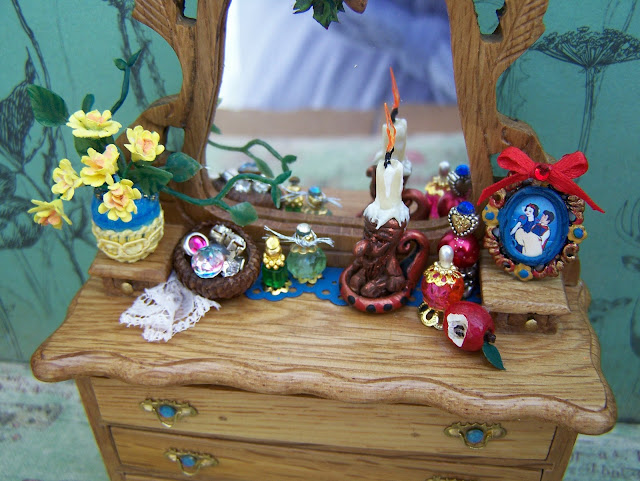 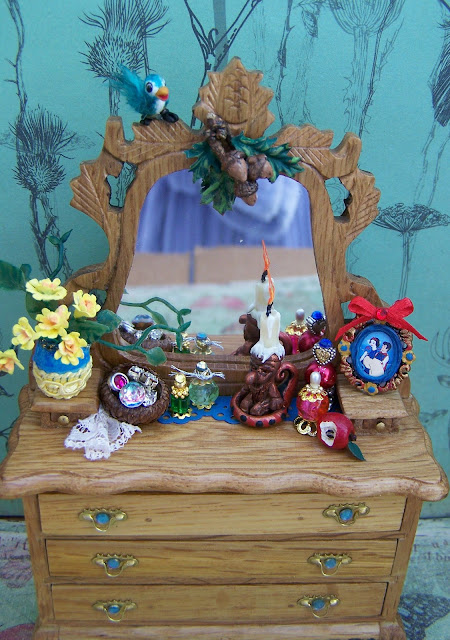 Missing from these photos was a hand-sculpted and mohaired disney-style squirrel I made that perched on the other bare side of the top.  I wish I had gotten pictures but I finished at night and they wouldn't turn out in the photocube.  So I'm sad to say we'll never see it here on the blog.  I was just too wiped out tired to deal with shooting it again before it shipped out :(  This was a custom order and my client was waiting for me to get it done. 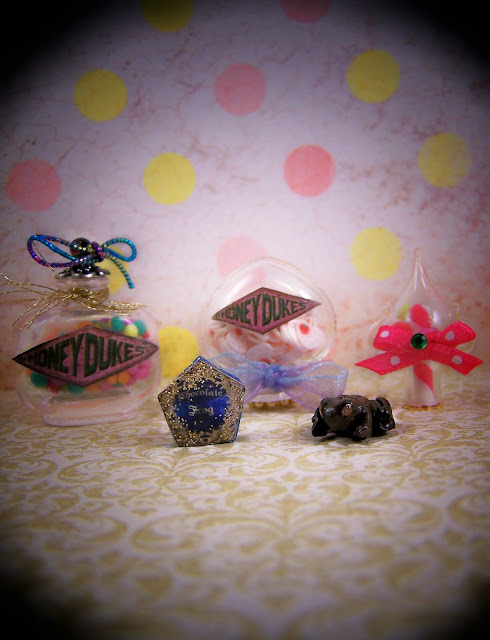 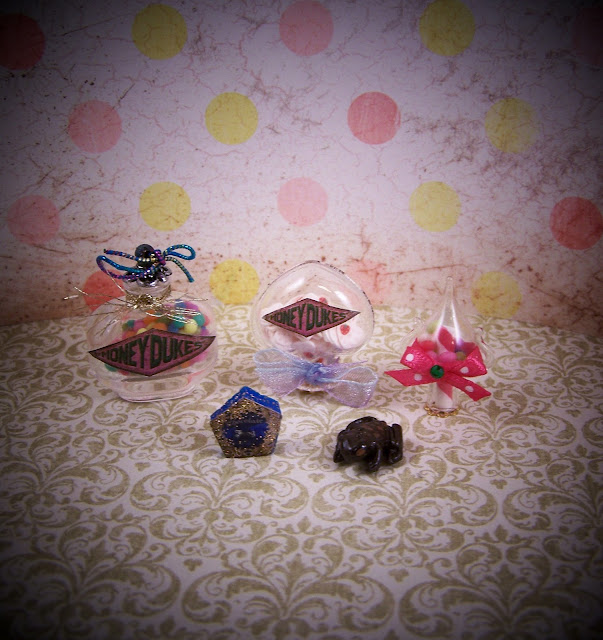 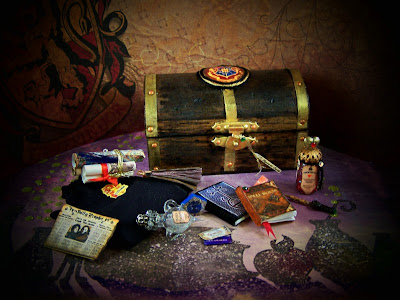 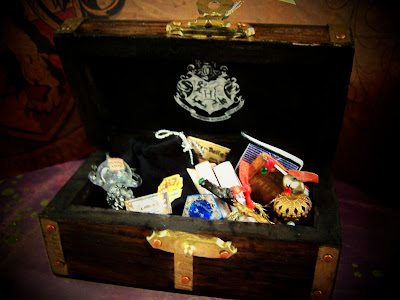 See this is what happens when I try to take pictures at night in my photocube :(  Yuck pictures!  This was a custom ordered (sold) Hogwarts chest with student items in it that a kid might take with them to hogwarts school of witchcraft and wizardry.  Not that you can tell, but there were some neat items in there.  A defense against the dark arts book, a wizard robe with a gryffindor crest on it, a hand carved wooden wand, a bottle of felix felicis (liquid luck) a bottle of Amortentia (love potion), more spell books, chocolate frog, roll of scrolls and a feather quill pen, a daily prophet newspaper, and tickets for the knight bus and for the hogwarts express train.

Below, a captured fairy set-A little fairy was made to look quite worried about her currently living conditions :)  The other one sleeps it away as though nothing can bother her :) 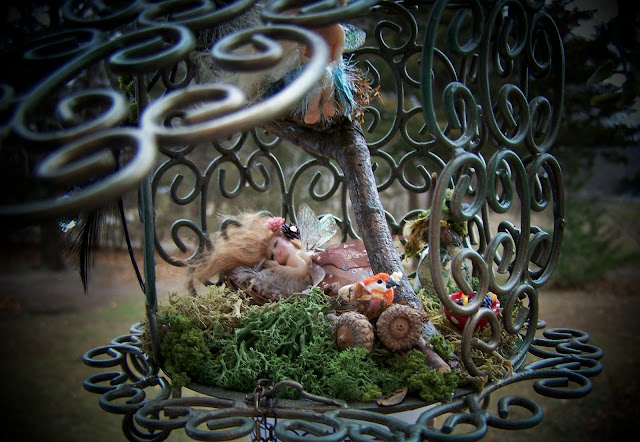 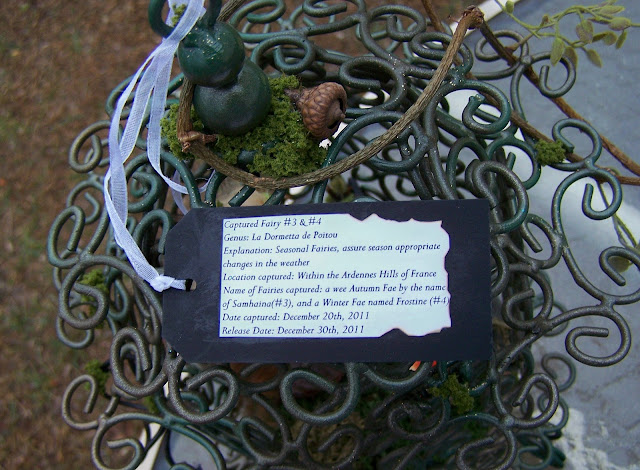 *Update-She did in fact buy this so it is now sold.
Ok this was also a custom ordered item, but I have no idea if the lady will actually get this or not.  It was ordered a long time ago and I haven't been able to get to it til now.  I have no idea if she'll be able to pick it up right before Christmas or if she'll have to pass.  It just worked out like this unfortunately.  It may be available, we'll have to see I guess.  The pictures are perfectly horrid due to the weather here (it's not easy getting pictures outside in the winter when you're freezing your butt off while shooting them :)  and this is about 100 times nicer in person than these crappy pictures show :(

Merry Christmas everyone!  I hope you have a great one :)

Posted by tarayvonne at 8:16 AM